March 5, 1980: Earl Weaver Is Elected Into The Baseball Hall of Fame 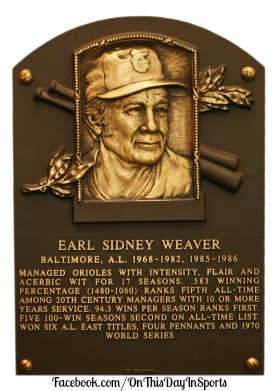 On March 5, 1996, Earl Weaver was elected into the Baseball Hall of Fame. The fiery manager had compiled 1,480 wins over 17 seasons as manager of the Baltimore Orioles. His teams won 4 pennants, 6 division titles and a World Series title while he was the skipper.  While he would be remembered for his famous temper he also would be remembered  for the way he helped revolutionize the game of baseball.

Born and raised in St. Louis, Weaver was signed as a second baseman by his hometown team the St. Louis Cardinals in 1948, he was just 17 years old.  Weaver could play solid defense but never developed as a hitter, he floated around in the Cardinals minor league system until 1951, then he was traded to the Pittsburgh Pirates organization who would later move him to the Baltimore Orioles. By 1957, the Orioles had him managing a minor league affiliate, he spent 11 1/2 years as a minor league skipper compiling an 841-697 record while winning three championships. In 1968, he finally reached the major league level. He was named first base coach before the '68 season began, by July he had taken over as manager of the club. He would hold that title until 1982, then again briefly in '85 and '86.

Earl changed the game by shying away from the small ball strategy and going for the 3 run homer instead. He once said "When you play for one run, that's usually all you get" the three run shot strategy is still used by many managers today. Weaver also put an emphasis on pitching and defense. He leaned on his coaches for analysis on pitchers and hitters alike, I have heard Weaver called the inventor of "moneyball" becasue of the way he used stats to his advantage. 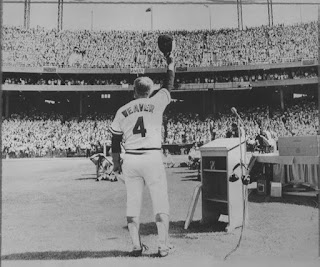 The Orioles became a force to be reckoned with in the late sixties and early seventies. He led them to the World Series for the first time in 1969 where they were beaten by "The Miracle Mets", it was just the tip of the iceberg. The Orioles returned to The Fall Classic in 1970, this time they took on the Cincinnati Reds a.k.a "The Big Red Machine", they would go onto win the series in just 5 games to become World Champs. The team went to their third consecutive World Series in 1971 and faced off with the Pittsburgh Pirates, the series went the distance as the Pirates prevailed after 7 games. Following the '71 appearance in the Fall Classic his team remained a consistent contender year in and year out. They finally reached the World Series again in 1979, it was a rematch of the '71 series against the Pittsburgh Pirates. The series mirrored the '71 series as it also went to 7 games and the Pirates came out on top again. After finishing second in the AL East  in the strike shortened '81 season Weaver coached one more year. The '82 campaign came down to the final game of the season, the Brewers sat tied with the O's with 94 wins. Weaver's Orioles lost the game 11-2 and it looked like his career as a major league manager was over, the team sent him off with a tribute following the game. The fans gave "The Earl of Baltimore" an ovation that brought the manager to tears, it was pure class by the fans in Baltimore. You can watch it here https://www.youtube.com/watch?v=D13-QS5eQMM. He was lured out of retirement and returned to manage the Orioles in June of 1985, the team went a game over .500 with him at the helm the rest of that season. He decided to retire for good following the '86 season, it was the only time in his career the team's record dipped below the .500 mark.

When it was all said and done, Weaver had posted a .583 winning percentage, which is the greatest out of any manager in the last 52 years, of any manager who was in charge of their their team for a minimum of 6 seasons. He will always be remembered for his temper too, Weaver was ejected from more than 90 games in his career, and he often put on quite the show while being tossed. On one occasion Earl was headed to the dugout after being tossed screaming "I'm gonna check my rule book on that!" the umpire came back and said "Here, use mine" Weaver says "That's no good, I can't read braille!!!" He had some hilarious run ins with the men in blue that's for sure, none more famous than the time he was recorded using every word in the book after a balk call in 1973. While he had his moments, he was a winner that helped change the game of baseball, he had a remarkable career that ended in Cooperstown, New York. I hope to go there one day to see his plaque in person.

A short video from the Baseball Hall of Fame:
https://www.youtube.com/watch?v=M_wdaaxjh0Y
Posted by Wade Forrester at 12:53 PM