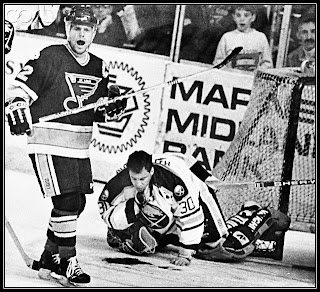 On March 22, 1989, at the Buffalo Memorial Auditorium in Buffalo, New York the Sabres took on the visiting St. Louis Blues. This game wouldn't be remembered for the score or for any type of milestone, it would be remembered for one of the most horrific injuries in the history of the NHL after Sabres goalie Clint Malarchuk had his throat cut by Steve Tuttle's skate. It all happened when the Blues right winger got tangled up with Sabres defenseman Uwe Krupp while crashing the net, as they flew in Tuttle was upended, then his skate caught the goalie in the neck and sliced his carotid artery. Within an instant Malarchuk was bent over losing a massive amount of blood. Everyone in attendance was beyond shocked, 11 people fainted, 3 players were physically sick, and two fans had heart attacks. With each and every heartbeat there was blood pumping out of his neck he had less than a few minutes to live when Buffalo's team trainer Jim Pizzutelli rushed to his side and pinched off the artery, which essentially saved Malarchuk's life. 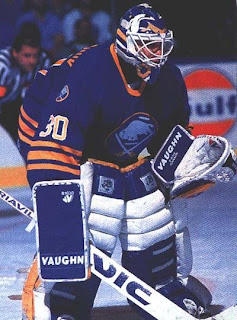 Malarchuk left the ice on his own feet and his trainer was able to stop the bleeding until the wound could be stitched up by doctors. It took 300 stitches to close the slice across his neck and his life had been saved. Malarchuk knew he was close to death and his main concern was that his mother was watching the televised game, the first thing he asked was for someone to call his mom to tell her that he loved her, he then asked for a priest.  Luckily his life was saved and he didn't have to be read his last rites.

It had to be rough for the show to go on but the teams did finish the game with Jaques Cloutier stepping in between the pipes for Malarchuk. The Sabres would go on to lose the contest 2-1 but I'm sure they knew that they were lucky that a life hadn't been lost with this freak accident. I could only imagine the sick feeling that both teams had after witnessing such a horrible thing. Malarchuk made a full recovery and just four days after the accident he returned to practice and a week after that he returned to the ice against the Quebec Nordiques. Some of the different doctors he had spoken to told him to take the rest of the season off, it was something he didn't even consider. Malarchuk was between the pipes in the playoffs for the Sabres but his team was knocked out in the first round by the Boston Bruins. Even with an early exit from the playoffs he knew he was lucky to be there.

The video of the incident is very graphic and not for the faint of heart. It literally gives me chills when I watch it: http://www.youtube.com/watch?v=dR-wA4SmbO4

Here is an interview with Clint one week after the injury:
https://www.youtube.com/watch?v=I5ek_3zo8XM