On March 16, 1964, NFL commissioner Pete Rozelle reinstated future Hall of Fame running back Paul Hornung and All Pro defensive tackle Alex Karras after a one year suspension for gambling. Hornung and Karras both had admitted they had bet on games they had played in and the commissioner was forced to take serious action. Five other players from the Lions were also suspended but none of those men were as well known as Karras or Hornung. Rozelle took swift action in order to make sure the players in his league knew he meant business when it came to gambling. 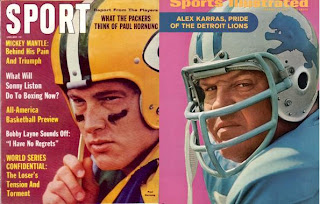 Both players had made a mark for their teams and it was a huge blow to not only their careers but for the organizations they played for. Hornung had won the league's MVP award in 1961 and was a back to back Champion as a member of  The Pack in '61 and '62. Karras was a monster on the field and he was selected to the Pro Bowl for three consecutive seasons starting in 1959. Both Hornung and Karras admitted to their indiscretions  and Rozelle chose to suspend them indefinitely. Hornung was remorseful for the decision he had made while Karras thought what the commissioner chose to do was unjust and he made it known. Karras took up professional wrestling until his suspension was lifted, it was something he had dabbled in before his career in the NFL began. After he returned to the NFL in 1964, he was asked to call heads or tails during a coin toss and replied "I'm sorry sir. I'm not permitted to gamble."

Both Hornung and Karras were lucky to be reinstated and they both would have success when their careers got back on track. Hornung won two more championships in '65 and '66 and Karras returned to the Pro Bowl in 1965. The suspensions of Hornung and Karros was something Rozelle had to do, some considered it controversial at the time but if he would have sat on the sidelines and let the inmates run the asylum it might have snowballed into something that changed the landscape of the NFL forever. Both players learned a lesson the hard way then moved on. It might have been a black eye for the NFL but time marches on and they were both able to overcome a bad decision.

Hornung credited Vince Lombardi for lobbying Pete Rozelle to reinstate him and he promised his coach he would stay away from gambling, it was a promise that he kept. After his days on the gridiron ended Hornung spent some time in the booth and became a successful real estate investor. Karras went onto have a successful career in film most notably he was part of the cast of Blazing Saddles and the hit tv show Webster. In the grand scheme of things the one year is a blip on the radar of these mens lives, they both had great careers in football and they both lived great lives after they left the game. It is too bad they made the choice to gamble but at least they were able to resume their careers on this day.