On March 11, 1979, Los Angeles Kings defenseman Randy Holt, was assessed 67 penalty minutes in a 60 minute game. It was a record setting night for Holt as he shattered the previous record of 52 penalty minutes in a game, set by Jim Dorey in 1968. Holt's record still stands today and there is a good possibility it will never be broken. The craziest thing is it all went down in the first period of play. 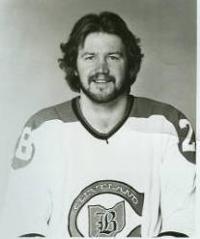 Holt's career started in the Chicago Blackhawks organization, most of his time with their organization was spent with their top minor league affiliate the Dallas Blackhawks. While he was in the minors Holt established himself as one of the toughest men around. Holt spent a little more than 3 seasons with the Blackhawks organization before he was dealt to the Cleveland Barons in November of 1977. The Barons lacked depth and it gave Holt an opportunity to stick around at the NHL level. It was the first time he played more than 12 games at the top level, in fact he played in 48 games for the Cleveland team. Holt only scored 5 points that season, he also recorded 249 penalty minutes which was the fourth most in the NHL during the '77-'78 season. The Barons organization folded following that season and Holt was claimed by the Vancouver Canucks in a dispersal draft. His time in Vancouver was short, he played just 22 games in a Canucks uniform before he was traded to Los Angeles. In that short time with Vancouver, Holt had spent 80 minutes in the sin bin. Changing uniforms didn't change where he spent his time, he finished that season with career high 282 minutes in the box and 67 of those minutes came in one game. 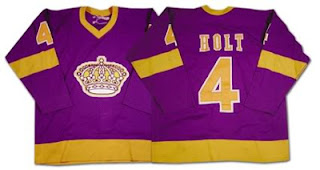 The night Randy Holt put his name in the record books the Kings took on the Flyers in Philly. Holt picked up his first minor early in the contest, then at the 14:58 mark he dropped the gloves and fought Philadelphia enforcer Frank Bathe, Holt was sent to the box with a 5 minute major for fighting and a game misconduct. With the game barely underway Holt had 22 penalty minutes under his belt, and there was a lot more on the way. At the end of the first period Holt decided to settle a score with Philadelphia center Ken Linseman, he thought Linseman had gotten a cheap shot on him earlier in the game and he wasn't going to let it slide. The result was a huge bench clearing brawl with fists flying from every angle. With the refs dealing with one group of men throwing down Holt squared off with Philadelphia right winger Paul Holmgren, it was epic. They pummeled each other by tossing haymakers and landing shot after shot to the other guy's face. The fight continued for a few more minutes all around him. The best way to truly comprehend what went down is to see it with your own eyes; http://www.youtube.com/watch?v=-hMesmZTSz8. When ordered was restored Holt was assessed 45 more minutes in penalties which included a triple game misconduct. he was now the owner of one of the most infamous records in hockey and he was also not very well liked in the City of Brotherly Love. The Flyers went onto win the game by the score of 6-3.

Holt spent another season in Los Angeles before being traded to the Calgary Flames in 1980, he had his best year in Calgary as far as playoff success goes. He helped the Flames reach the Semi Finals before they were knocked out by the Minnesota North Stars. Following that season he was dealt to the Washington Capitals. He continued to drop the gloves and was a regular resident of the penalty box, in his second year in Washington he led the entire league with 275 penalty minutes during the '82-'83 campaign. Holt's career came to a close in the '83-'84 season after a short stint with the team that he had faced off against just a few years before, he spent 26 games with the Flyers before he hung up the skates for good.

Holt played in 395 games in his NHL career, he scored just 4 goals and recorded a grand total of 41 points at the top level, he also was sentenced to 1,438 minutes in the sin bin. He wasn't known for his playmaking ability or his ability to score a flashy goal, he was known for letting his gloves hit the ice and taking care of business with his fists. With the numbers Holt put up and his lack of playoff success there is a good chance that his name would fall to the wayside when it comes to the history of hockey, that crazy night in Philadelphia made sure that his name would not be forgotten