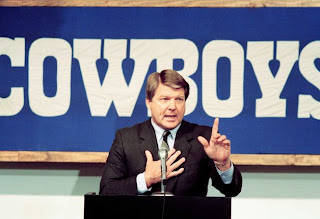 On March 29, 1994, Jimmy Johnson announced that he would be stepping down as the head coach of the Dallas Cowboys. Johnson had helped build the Super Bowl winning teams of the early 90's but couldn't see eye to eye with the owner of the team Jerry Jones. Johnson served as Dallas' head coach from 1989 to 1993, in that time he won two Super Bowls and established the Cowboys as one of the best teams of the early 90's.

After winning the National Championship as head coach of the Miami Hurricanes in 1987, Johnson was the next hot coaching prospect. Jerry Jones had just purchased the Cowboys and was looking to replace the legendary Tom Landry. Landry had been the only head coach the Cowboys had ever known since their inception in the league in 1960. Jones and Johnson had been friends and teammates at the University of Arkansas which helped persuade Johnson to take the job in Dallas.

Johnson's tenure in Dallas started off a little rough, in his first season the Cowboys went 1-15. He had drafted what would become his franchise quarterback in Troy Aikman, but Aikman was raw and he still lacked a team around him. Four games into the 1989 season, Johnson engineered the largest trade in NFL history by moving Herschel Walker to the Vikings. The trade was instrumental in turning the team around, names like Emmitt Smith, Alvin Harper, and Darren Woodson came to Dallas through draft picks they had garnered from Minnesota. In his second year with the team Johnson had revamped the roster and their record improved to 7-9, the team was on the rise.  In just his third year the team posted an 11-5 record and grabbed a Wild Card spot in the playoffs. The team was knocked out in the division round but they had completed a huge turnaround and the best was yet to come. 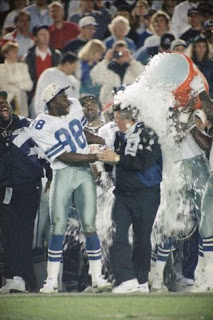 The 1992 Cowboys were absolutely dominant under Johnson, they cruised to 13-3 and won the NFC East for the first time since 1985. The Cowboys rock and rolled through the playoffs then took down Jim Kelly and the Buffalo Bills by the score of 52-17 in Super Bowl XXVII. There was no Super Bowl hangover for that club, they came right back the next year and did it again. The '93 team went 12-4 and won the NFC East crown for the second consecutive season.  The Cowboys marched right back through the playoffs and took down the Bills for the second year in a row, this time by the score of 30-13. With back to back Super Bowl Championships under his belt nobody expected the coach's resignation.

It ultimately came down to a power struggle and with Jones as the owner of the team, there could only to be one winner. Johnson surprised everyone with his announcement that he would be leaving the team. The tension between him and Jones had come to a boiling point and he was done as the head coach of the Dallas Cowboys. Jerry Jones hired Barry Switzer to take over the club and he would lead them to the NFC Title game in his first season in 1994 then a Super Bowl Championship in 1995. While Switzer was the head coach the team won their third ring in a four year span, a lot of credit went to the way Johnson had built the team and deservedly so. 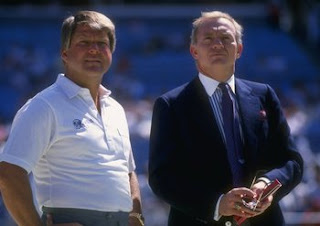 Johnson spent a couple of years in the booth before returning to coaching in 1996. It would be the second time in a row he would be following up a coaching legend, this time it was Don Shula in Miami. Things didn't go the way he had envisioned in Miami, while the team never dipped below .500 they never did achieve great success. The 1999 season was his last one, he resigned as the head coach of the Dolphins after a humiliating loss to the Jacksonville Jaguars in the first round of the playoffs. Now days you can catch him with the crew on Fox before games and at halftime, I would imagine that job is a lot less stressful than running a football team.

https://www.facebook.com/OnThisDayInSports
Posted by Wade Forrester at 4:25 AM