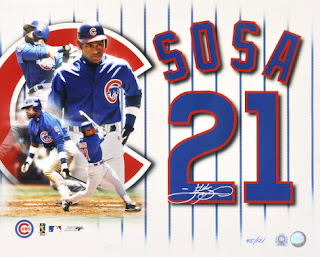 On March 30, 1992, the Chicago Cubs traded outfielder George Bell to the Chicago White Sox for a relief pitcher named Ken Patterson and a young outfielder named Sammy Sosa. Bell was an established major leaguer that had won the A.L. MVP as a member of the Toronto Blue Jays in 1987, on the other hand Sosa was just a kid who had not lived up to expectations up to that point. While Bell only played two more seasons, Sosa established himself as one of the best power hitters in the game on his way to becoming the all time home run leader in Chicago Cubs franchise history.


The White Sox had a win now mentality and they looked at 32 year old Bell as the final piece to the puzzle. Bell hit 25 long balls while knocking in 122 runs. His success was short lived, his numbers fell off dramatically in 1993 and he retired following the season. On the other side of town Sosa arrived to the Cubs as an unpolished 23 year old kid, while the hopes were high for him nobody could know what they had in store. In his first season with the Cubs he was still figuring things out, he hit just 8 homers and recorded 25 rbi over 67 games. Sosa's second season in a Cubs uniform was a turning point in his career, his numbers jumped dramatically, while Bell was struggling to put together one last season Sosa cranked out 33 jackertons and plated 93 runs, the Sammy Sosa era was just beginning on the North Side. 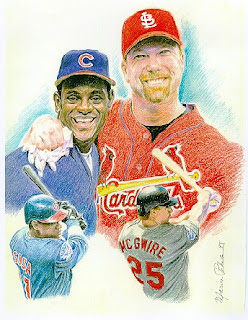 Sosa developed into a solid ballplayer that could knock the ball out of the yard anytime he stepped up to the plate. From 1993 to 1997 Sosa averaged 34 home runs a year and had knocked in over 500 runs. Then came 1998, the season will be remembered for the great home run chase with Sosa and Mark McGwire putting on an impressive show in a chase to see who could surpass Roger Maris' record of 61 home runs in a single season. The two sluggers knocked home runs out of the park at a record pace, they both surpassed Maris, Sosa finished the season with 66 homers while Big Mac took the crown with his 70 on the year.

With the '98 season included Sosa averaged 57 home runs a season over the next 5 years, it earned him the nickname "Slammin Sammy" Sosa. Despite all of his success at the plate he couldn't bring the Cubs the ring they have been seeking since 1908. He spent 13 seasons in a Cubs uniform, in those 13 years he jacked 545 home runs and plated more than 1400 runs. I'm pretty sure the Cubs organization was pretty happy with the deal they made in 1992. In February of 2005 the Cubs traded him to the Baltimore Orioles, coincidentally he he hit 600th home run in an inter league game against the his former club. After a year in Baltimore Sosa left the game for a couple of season before a season with the Rangers in 2007. He flirted with a return but it never came to fruition. Sosa officially retired in 2009.

While Sosa will forever be linked with steroid use in baseball, what he did in a Cubs uniform was remarkable. I know that the steroid era has been turned into something that many would like to forget but that's not the case for me. I look at it as history and good or bad we can't deny history. I have a lot of fond memories from the home run chase of 1998, one of the best memories was when McGwire hit 62, with the Cubs playing the Cardinals at Busch, Sosa came running into congratulate McGwire on his historic accomplishment. While some people criticized Sosa after he congratulated Big Mac, I think the two players had formed a bond over that season that couldn't be denied. It really was a year to remember and I would dare anyone to say they didn't enjoy it in the moment. I would understand if the view has changed over time but in '98 Sosa and McGwire captivated a nation. I'm sure each and every Cubs fan was pleased with the deal that brought Sosa to the North Side.
Posted by Wade Forrester at 12:50 PM