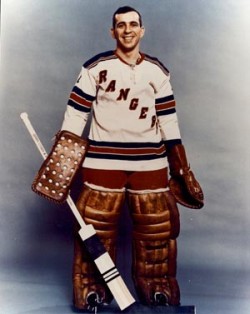 On March 15, 1989, the New York Rangers retired Eddie Giacomin's #1. It was a much deserved honor for one of the all time fan favorites in New York Rangers history. Giacomin played 10 seasons with the Rangers, he led the league in wins in three of those seasons and helped the team reach the Stanley Cup Finals in 1972. When his career was coming to a close the Rangers put him on waivers, he was quickly snatched up by the Detroit Red Wings. When the Red Wings came to Madison Square Garden to play the Rangers the crowd cheered Giacomin and chanted his name. It was an emotional return for the goalie who would always consider himself a New York Ranger. Many years later he would have another emotional return to The Garden on the night he watched his #1 raised to the rafters, he would forever be among the best in the history of the organization.

Giacomin broke into the league in the '65-'66 season and it was a bumpy ride right out of the gate he went 8-20-6 that season then would show he had what it took to play with the big boys the following year by leading the league with 9 shutouts on his way to posting a 30-27-11 record, Giacomin also led in wins and ties in his second year in the league and he made his first of six all star appearances. Giacomin and his backup Gilles Villemure shared the Vezina Trophy as the top goaltenders in the league in 1971. While he never did win the Stanley Cup he came damn close in 1972 when the Rangers took on the Bruins in Stanley Cup Finals the series went to 6 games with the Bruins coming out on top. Giacomin was a workhorse for his team and the fans in New York appreciated his strong play even after he was put on waivers in October of 1975.  After he was snatched up by the Red Wings Giacomin had two more solid years in Detroit before retiring on January 17, 1978. 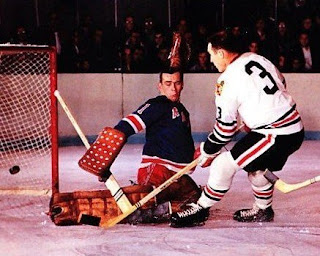 Giacomin will forever be loved in New York and the night he returned to Madison Square Garden was something that will forever be remembered. Giacomin was in tears during the National Anthem, which could barely be heard over the crowd chanting ED-DIE! ED-DIE!! ED-DIE!!! It had to be one of the coolest moments in Madison Square Garden history while they were cheering for a member of the other team, he was one of them and they let him know that.  The New York Fans followed it up by cheering for him during the entire game, it truly showed how much they had come to appreciate him. He received the highest honor in hockey by being inducted into the Hockey Hall of Fame in 1987, just two years later his #1 was retired by the Rangers. He got to listen to the thunderous chant of his name that night like he had so many many nights before. He stood there one more time on the edge of tears as he listened to those fans chant ED-DIE! ED-DIE!! ED-DIE!!!

Check out this Legends of Hockey Eddie Giacomin Video: http://www.youtube.com/watch?v=ywKuk--FzS4
Posted by Wade Forrester at 12:41 PM