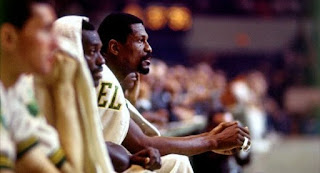 On March 12, 1972, the Boston Celtics held "Bill Russell Day" at the Boston Garden, they honored him by retiring his #6 in a ceremony before his team took on and beat the New York Knicks 112-109. Russell spent his entire 13 year career with the Celtics and was a key component of one of the greatest dynasties in the history of the NBA. He was named the MVP of the league 5 times, selected as an all star 12 times, and won the NBA Championship Title an astounding 11 times before he retired following the '68-'69 season.

Russell was born in Louisiana, his family moved to Oakland, California during his youth and it was there he took up the sport that made him famous. He wasn't the typical superstar athlete in high school, in fact he struggled a bit and was nearly cut from his team several times. The coach of his high school team saw that he had the ability to play the sport and encouraged him to work on his fundamentals so he could reach his true potential. Russell listened to the coach and by the time he finished high school his hard work paid off enough to earn him a scholarship to the University of San Francisco. Great things were on the way for this kid.

Russell had grown to a towering 6' 9" and he became a dominant player on the court, teamed up with guard K.C. Jones they led the Dons to consecutive NCAA Championships in 1955 and 1956. He had averaged 20.7 points and 20.3 rebounds in his 3 years at USF. With the NBA Draft on the horizon in 1956, the Celtics general manager and coach Red Auerbach was hoping to figure out a way to land Russell on his squad, it wasn't going to be easy since the Celtics didn't pick until late in the first round. Auerbach started thinking trade and he knew that the Rochester Royals held the first pick and would not pay the money that Russell would demand so the next team on the list was the St. Louis Hawks. The owner of the Hawks, Bob Kerner was open to the possibility of a deal if he could land St. Louis native and former Saint Louis University star Ed Macauley. The deal almost hit a snag when Kerner decided he wanted a little bit more, the Celtics had to send Cliff Hagan to complete the transaction that brought Russell to Boston. The deal brought St. Louis a Championship in 1958 and it brought Boston a dynasty that lasted more than a decade.

After winning a gold medal in the 1956 Olympics Russell joined his new team. He played in 48 games, putting up a 14.7 points per game average while leading the league with a 19.6 rebounds per game average. Russell's rookie season ended with a title as the Celtics beat the St. Louis Hawks in 7 games. Russell went down in the third game of the 1958 Finals and his playoff run ended early, the Hawks took home the title after 6 games. It was merely a hiccup for Russell and the Celtics. They won the title for the next 8 consecutive years with Russell leading the charge. They were denied their ninth consecutive championship by the Philadelphia 76ers in 1967, but they came right back and won the title in 1968 and 1969.  The 1969 Finals went to a 7 games and Russel contributed with 21 rebounds in what would be his final game as a professional basketball player. He would surprise everyone by announcing his retirement following the season. The fans and media alike felt betrayed, Russell who was only 35 years old had not only left the team without a center they were also in need of a coach, he had taken on the role of player/coach during the '65-'66 season after Auerbach retired from coaching. Auerbach remained with the organization as GM and he was so blindsided by Russell's retirement that he didn't even draft a center. The first season the team was without their star center they missed the playoffs for the first time since 1950. 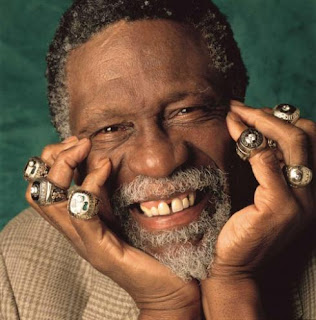 When Russell left the game he left on his own terms and they were terms the fans and media had to accept. Time heals all wounds and just a couple of seasons after he made his choice the organization honored him by raising his #6 to the rafters in Boston. Russell was one of the best defensive minded centers to ever play the game, he scored more than 14,000 points in his career and he was a rebounding machine that had more than 20,000 rebounds on his resume. Bill Russell will forever be a legend in Boston and he will also be remembered forever in the history of basketball, he was inducted into the Naismith Basketball Hall of Fame in 1975.

Bill Russell's retirement letter which was published in Sports Illustrated in 1969:
http://www.insidehoops.com/forum/showthread.php?t=166170