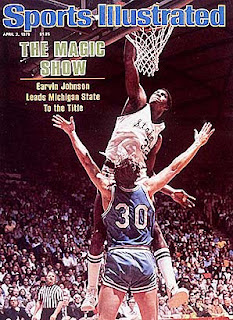 On March 26, 1979, Magic Johnson and the Michigan State Spartans won the National Title by beating Larry Bird's Indiana State Sycamores by the score of 75-64. The game stills holds the record for most watched ever and it established one of the greatest rivalries in the history of the sport.

Both Johnson and Bird had been stars in high school and they each continued to shine through college. Despite being recruited by powerhouses like UCLA and Indiana, Magic decided he wanted to play close to home. The Lansing Michigan native had narrowed it down to Michigan or Michigan State. When he was told he would be able to play point guard for the Spartans he decided that it was the place for him.

Bird had accepted a scholarship to play for Bobby Knight and the Indiana Hoosiers. He was just a small town kid from French Lick, Indiana and the life at the big school proved to be too much for him. 24 days after he became a Hoosier he decided that it wasn't going to work. Bird spent a year playing a little bit of basketball and working for the street department in French Lick before he enrolled at Indiana State. The school was far from a powerhouse but it was probably the best place for him as he was developing into the man he would become. Bird transformed the Sycamores from a team that had never been to the dance to a team that would go all the way to the title game in his senior year.  He had become a one man wrecking crew that averaged 30 points a game in his sophomore, junior, and senior seasons in college. Indiana State had never received an invitation to the big dance, that would change in his final year with the team. Bird was dominant through the first four games of the tournament and it led him to the showdown against Magic and Michigan State. 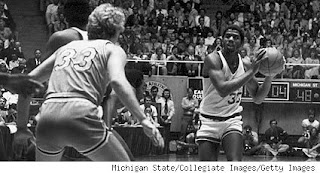 Michigan State coach Jud Heathcoate's plan was to disrupt Bird in hopes that he would have a bad offensive night. The plan worked. Bird shot just 7-21 from the field then 5 for 8 from the line, he finished with 19 points on the night but it wasn't enough to match Magic Johnson and the Spartans offense. Johnson scored 24 on the way to being named the Most Outstanding Player of the tournament. The game helped solidify basketball nationally as the entire nation tuned in to see these two greats go head to head.

The Boston Celtics had taken Bird with the 6th pick of the 1978 draft, he decided to play his senior season before he would enter the NBA. The Los Angeles Lakers took Magic with the first overall pick in 1979 and both players would be entering the league in the same season. They both went onto have some of the most storied careers in the history of the NBA. The Johnson/Bird rivalry continued throughout the 80's as the Celtics and the Lakers met three times in the NBA Finals. Bird and the Celtics were able to prevail over the Lakers in the 1984 Finals then Johnson and the Lakers beat the Celtics in 1985 and 1987. The rivalry between the two players truly helped basketball on both the collegiate level and the professional level. 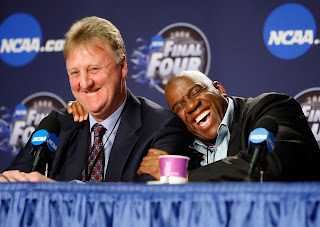 The thing that I have always thought was great about the rivalry between these two players is how it developed into a great friendship. They had true disdain for one another throughout the early years, by the mid eighties a photo shoot brought them together that was followed by a lunch at Bird's house. The two players who couldn't stand each other realized they were much more alike than they would have ever thought and from that day on they were friends. Bird was one of Magic's biggest supporters when he was diagnosed with HIV, in fact Bird was the first player that heard the news. Bird did what any good friend would do by letting him know he would be there by his side in good times and bad. They had come a long way from the Championship game in 1979.