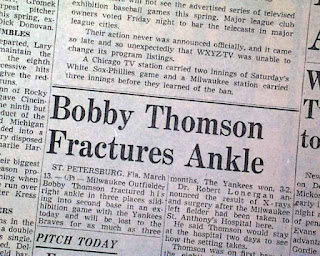 On March 13, 1954, newly acquired Milwaukee Braves outfielder Bobby Thomson broke his ankle in three places while sliding into second base during an exhibition game against the New York Yankees. It was a huge blow to the team, many thought the minute the injury happened their season went right down the tube. Thomson, who was best known for his famous "Shot heard round the World" in 1951 was replaced by a 20 year old kid named Henry Aaron. Hammerin Hank spent the next 21 years roaming the outfield for the Braves and he became one of the most prolific hitters of all time.

Thomson was brought over to the Braves in a 7 player deal and they had high expectations for the outfielder, despite the fact that people thought they couldn't make a run without him the Braves stayed in the race all season, on September 15th they were just four games out of first place, then stumbled a bit before finishing in 8th. Aaron impressed the fans and coaches by hitting .280 with 13 homers and 69 ribbies in 122 games, it was just the tip of the iceberg. 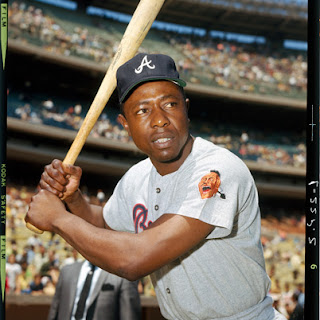 Aaron became a perennial all star, in fact he went to the mid summer classic every year from 1955 to 1975. He was a model of consistency, he hit 24 or more home runs every year from 1955 through 1973 and is the only player to hit 30 or more homers in as season at least fifteen times. He also hammered his way into the record books and some of his records still stand today, most notably the rbi record which stands at 2,297 His most coveted record will forever be the 755 home runs which was surpassed by Barry Bonds in 2007. Aaron faced relentless racism on his way to passing Babe Ruth's 714 home runs. To this day he has held onto some of the most ignorant letters he received on his way to breaking Ruth's record, which he did in April of 1973. He played with the Braves organization until the end of the 1974 season. The team moved to Atlanta in 1965 and they sent him back to the city where it all started by trading him to the Milwaukee Brewers following the '74 season where he wrapped things up after 23 years in the major leagues.

Aaron not only holds the rbi record he also is the record holder for extra base hits and total bases. He was a 25 time all star, a 3 time gold glover, he led the league in home runs 4 times and took home 2 batting titles. Aaron was named league MVP after the 1957 season, it was the only time he took home the award. The Braves also won the World Series in '57 which was his one and only championship. Hank Aaron was a truly one of the most consistent ballplayers to ever take the field and 40 years ago today he came jogging in for an injured Bobby Thomson, the rest is history.