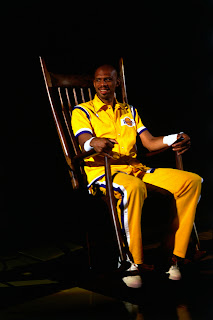 On March 20, 1990, the Los Angeles Lakers retired Kareem Abdul-Jabbar's #33. Jabbar came to the Lakers in 1975 after spending his first six years in the league with the Milwaukee Bucks. He helped lead the Bucks to a title in 1971 and had quickly become one of the best big men in the game. When he asked to be traded in 1975 the Lakers put together a deal that brought him to L.A., it was the best deal they ever made. He spent the next 15 years with the team and established himself as one of the best players in the history of the NBA by leading the Lakers to 5 titles and setting multiple franchise and league records. Many of those records still stand today, including the all time points record. In a halftime ceremony that Kareem would never forget, the fans at The Forum gave him a long ovation before Chick Hearn took the mic then passed it to his former teammate Magic Johnson then NBA commissioner David Stern told Kareem that he would be seeing him at the Hall of Fame.

You can watch the ceremony here:
http://www.youtube.com/watch?v=2RNwmtjTnD0

Before he was known as Kareem he was known Ferdinand Lewis Alcindor Junior, people called him Lew. Born and raised in New York he took up the game of basketball at an early age. He was always the tallest kid in his class and by eighth grade he could dunk the ball. He became a full fledged star in high school by setting New York City high school records in scoring and rebounds. His high school squad put together a stretch of 71 straight wins and won three straight city titles. His phenomenal play led him to UCLA where he would be coached by the legendary John Wooden. 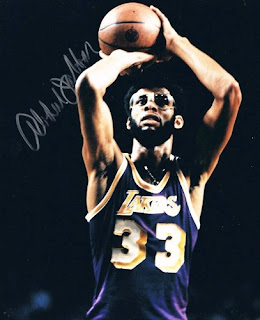 In college, Alcindor's game developed under Coach Wooden. His college career was much like his high school career. He won three straight titles and was part of a historic winning streak. Alcindor was so dominant with the slam dunk in college that the NCAA banned it form 1969 to 1976, it didn't stop him from excelling at the sport. He was a three time college player of the year while winning his three national Championships. He became a legend in Bruins history and he was well on the way to establishing himself as an all time legend in the game.

The Milwaukee Bucks won a coin toss that gave them the first pick in the 1969 draft and Alcindor was their man. The impact he made in Milwaukee was profound, the team went from a 27 win season to a 56 win season in his first year with the club. Alcindor took home rookie of the year honors and he was just getting started. The Bucks brought in a future Hall of Famer in Oscar Robertson to compliment Alcindor and both players helped the Bucks win it all in 1971. Alcindor not only won his first ring that season, he won his first scoring title and was named league MVP. One day after the Bucks won the title Alcindor announced that he had converted to Islam and would be known as Kareem Abdul-Jabbar. He may have had a different name but he was the same dominant force on the court. Jabbar helped Milwaukee win their division for four seasons in a row and claimed two more MVP awards while taking home another scoring title in 1972. He led the Bucks all the way to the 7th game of the NBA Finals in 1974 but lost in 7 games to the Boston Celtics. Following that season Jabbar decided that Milwaukee didn't address his cultural needs and requested to be traded to L.A. or New York. The Bucks listened and struck a deal with L.A., The Bucks received center Elmore Smith, Brian Winters, Junior Bridgeman and Dave Winters in return for Jabbar and a reserve player named Walt Wesley. Bridgeman had a solid career with Milwaukee and he even had his number retired by the team in 1988 but all four of those men combined scored 32,744 in their careers which is not even close to the production that Kareem produced. 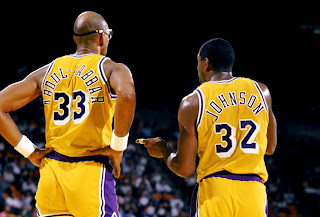 The Kareem era in L.A. began with a bang, he averaged 27.7 points per game on his way to setting the rebound record that still stands today. He won his fourth league MVP award and they were happy with the deal they had made. His play on the court was absolutely dominant he won another MVP award before Magic Johnson arrived in 1980. Together they transformed the Lakers into one of the greatest dynasties in NBA history.  He won took home sixth MVP award in 1980 and helped bring the Lakers a title. Kareem and Magic found themselves in The NBA Finals 8 times in the 1980's and took home the Championship Trophy 5 of those times. When he announced that he would be retiring following the '88-'89 season he went on a farewell tour. It was very similar to what we watched last year with Chipper Jones from the Atlanta Braves, everywhere he played he received a standing ovation. Even with him playing for their opponent the fans knew they were witnessing one of the greatest players to ever take the court. After the Lakers lost to Detroit in the '89 NBA Finals the Kareem era had come to a close. It was one of the greatest eras that any city would ever get to experience with a player and they let him know that by raising his #33 to the rafters, then just last year they presented a statue that has Kareem shooting his famous sky hook. Forever a legend.