On March 23, 1957, the National Championship game took place in Kansas City, Missouri. The game featured #1 ranked North Carolina #2 Kansas. Despite the rankings the Jayhawks entered the contest as a 3 point favorite. They were pretty much playing in their own backyard and they had this kid named Wilt Chamberlain on their squad. The North Carolina team had a few weapons of their own and they were able hang with the Jayhawks the entire game and then some. When I say "and then some" I mean it took three overtimes to decide this one. The coach of the Tar Heels, Frank McGuire implemented a game plan that wouldn't only slow Wilt down it frustrated the entire Kansas squad. The plan was to shake Chamberlain up a bit then triple team him all night long which forced Kansas to shoot from the outside. It was a weakness for the squad and McGuire would exploit it. 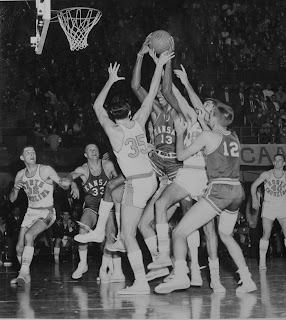 The Tar Heels came out on fire, at one point they found themselves up 19-7 before the Jayhawks started to close the gap. The score at the half had North Carolina up 29-22 and Kansas had a hill to climb. The Jayhawks were able to get things together and they outscored the Tar Heels 24 -17 in the second half. With it all knotted up at 46 this game was headed to overtime. Throughout the game North Carolina tried to stall out by passing the ball around, both teams used the strategy in overtime. It was almost ridiculous, each team scored a basket in the first overtime then neither of them scored in the second overtime. With just 31 seconds to go Kansas' Gene Elstun hit one of two free throws that put the Jayhawks up 53-52. The Tar Heels attempted to drive the lane only to be blocked, then Joe Quigg grabbed a rebound and was fouled. Quigg went to the line and knocked down both shots that put North Carolina up by a point with just seconds to go. Ron Loneski tried to inbound the ball to Wilt, only to have Quigg knock it down and the Tar Heels were National Champions. 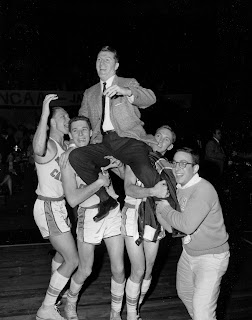 Despite the losing effort Wilt Chamberlain's effort earned him Most Outstanding Player of the Final Four. In the Championship game he scored 24 points and grabbed 14 rebounds, it was an outstanding effort by one of the most outstanding players of all time. Kansas coach Dick Harp was simply out coached in this one. McGuire had studied every game that Kansas had played in what was a 24-3 regular season and he knew any team that had success triple teamed Chamberlain all day long. The strategy wouldn't work today since the shot clock is a part of the game, but ya never know Kansas still might have lost since none of the other players on the floor could hit the broadside of a barn. Maurice King was the only other player on the Kansas squad to score in double digits, he had 11 points in the game. The leading points scorer for North Carolina was Lennie Rosenbluth. He had helped them cap off a perfect 32-0 regular season by averaging 28 points on the year, he scored 20 points in this one. Rosenbluth and three other players reached double digits with one of them being the hero of the day Joe Quigg. Quigg only scored 10 points in the game but he sealed the deal by not only hitting the two crucial free throws, he also stole the ball out of the air with it all on the line. It was the first Championship in basketball for the Tar Heels.

This game is considered to be one of the best title games in the history of the NCAA. Largely because it is the only triple overtime Championship game in the history of the tournament. When I read about it, I can't help but wonder how different of a game it would have been if it was played by today's standards. It's really hard to say. It was hardly a triple overtime thriller with the way the game was played. If I was watching an overtime game and both teams were just passing the ball around I might yell a few choice words. It was a different time and really it was a whole different game. I'm glad the sport has evolved.
Posted by Wade Forrester at 12:16 PM