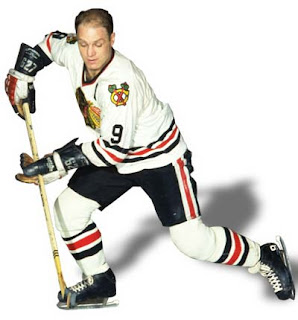 On March 25, 1962, in the final game of the season at Madison Square Garden in New York, Blackhawks left winger Bobby Hull scored his 50th goal of the season. Hull was just the third player to reach the milestone, only Rocket Richard and Bernie Geoffrion had accomplished the feat before "The Golden Jet" was able to join them in the exclusive 50 goal club.

It was a big game in New York that had the scoring title on the line. Hull had been in a battle all season long with Rangers right winger Andy Bathgate for the league lead in points and this contest would decide who took home the Art Ross Trophy. Just 5 minutes into the game Hull made history when he got the puck passed Rangers netminder Gump Worsley. The goal gave Hull a one point advantage over his rival, then just a few minutes later Bathgate evened things up with a goal of his own. Both players would be held in check the rest of the game despite spending a lot of time on the ice and they each ended the season with 84 points. Hull took home the Art Ross Trophy because he led in the goals category with 50 to Bathgate's 28. The Rangers won the game by the score of 4-1 and it marked the end of a truly great season for both players. 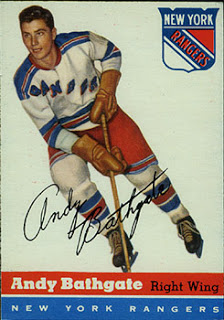 This season marked the prime of his career for Bathgate, at 29 years old he had literally grown up with a Rangers emblem on his chest. He had accomplished a lot throughout his time with the Rangers including being named league MVP in 1959. He was a selfless player who could put the biscuit in the basket just as quick as he could hit a teammate with a pass that setup the game winning goal. In February of 1964, Bathgate was traded to the Toronto Maple Leafs. It was a move that shocked him and the fans in New York. He helped Toronto win the Stanley Cup by scoring 5 goals and 4 assists throughout the playoffs. After one full season with the Maple Leafs he was dealt to the Red Wings, then picked up by the Pittsburgh Penguins in the 1967 expansion draft. At the end of the '70-'71 campaign his NHL career came to a close. It was a great career that earned him an induction into the Hall of Fame in 2009.

While the '61-'62 season was the pinnacle of Bathgate's career, it was just the beginning of Hull's journey to the Hall of Fame. At 23 years old it was his fifth full season in the league. From day one the Blackhawks new that had something special, at 19 years old he had blazing speed and made an immediate impact with the team on the way to finishing as the runner up for the rookie of the year honors. He only got better, by his third year in the league he led all players with 39 goals and 81 points, he had quickly become one of the brightest young stars in the league. While he didn't invent the slapshot he helped revolutionize its use by developing the fiercest slapshots in the game. He would lead the Hawks to a Stanley Cup Championship in 1961, by taking down the Detroit Red Wings. Hull would reach the Stanley Cup Finals two more times but wasn't able to win a second title. In 1966, Hull did something that no player had done before by scoring more than 50 goals in a season. He reached the 50 goal mark 5 times in his career, with his career high coming in the '68-'69 season when he lit the lamp 58 times. 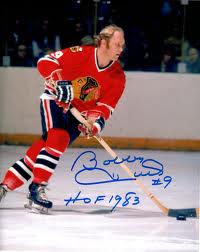 Much like Bathgate, Hull grew up wearing the jersey of one team, that would change in 1972. Bobby was 33 years old and he was unhappy with his contract. A new league had formed that was known as the World Hockey Association. The Winnipeg Jets lured Hull away by offering him a million dollars over ten years to be a player/coach in their upstart league. Hull gave the league instant credibility and he continued his winning ways with in Winnipeg with a 77 goal season in 1975, then two championships, the first one coming in 1976 then the second in 1978. By 1979 the WHA and the NHL merged, the Edmonton Oilers, Hartford Whalers, Quebec Nordiques, and Hull's Winnipeg  Jets were all now NHL clubs. He played just 18 games with the Jets before being moved to the Whalers where his great career came to an end. At that point, Hull had lit the lamp 610 times as a member of the NHL and another 303 times while he was with the WHA. Bobby Hull had spent 20 years on the ice and had forged one of the best careers in the history of the NHL. He will forever be remembered as one of the greatest Blackhawks to ever strap on a pair of skates. He still holds franchise records for most goals in a season with 58 and no other player has scored more than his 604 goals with that uniform on. He joined the ranks of hockey's immortals in 1983 when he was inducted into the Hockey Hall of Fame.

Both of these videos are close to 10 minutes long, they provide great insight to each of these great men.

Legends of Hockey Bobby Hull: http://www.youtube.com/watch?v=JyMwd1XvLd0
Posted by Wade Forrester at 11:52 AM