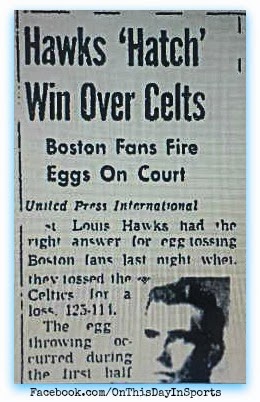 On January 18, 1961, eggs flew in Boston with the Celtics taking on the Hawks. The incident happened in the first half with the Celtics up 62-57. It was retaliation for an earlier incident that happened in St. Louis as the Kings of the East battled the Kings of the West. The two teams built a strong rivalry over that '60-'61 season that would end with a showdown in the Finals.

The blood began to boil in St. Louis early in the season as the fans had watched the Hawks lose to the Celtics in their first three meetings. The games were highly contested but the Celtics took the first three which led to a frustration among the St. Louis faithful. The frustration went a bit far when they met for a fourth time, that contest was held in St. Louis three days after Christmas and the Hawks were finally able to grab a game with a 105-99 victory. Before the game was decided in the final quarter a late timeout came with the fans in the stands throwing eggs on the court and at the Celtics players. There was a delay as, not only the floor needed to be mopped, but the backboard had to be wiped down as well. When the legendary coach Red Auerbach was leaving the floor after the game a fan ran up and smacked him square in the head with an egg and he had a big red mark on his head to prove it. In a postgame interview Auerbach said "This is a bush town and you can quote me" obviously fired up he went onto say "they ought to arrest people like this and charge them with peace disturbance. You learn darn well that fans get excited. But if they bring eggs in they bring'em to throw. They're not going to take'm home." He finished off with "When you play here you have to run through a gauntlet that throw programs and other things before you get off the floor." He was pissed and he had every right. 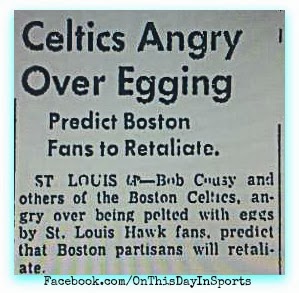 The next meeting in St. Louis came on the 8th of January. In that contest the fans behaved but the game didn't come without its own drama. Late in the second half Bob Pettit the star of the Hawks had suffered an injury above his left eye that forced him from the game. Without their star the Hawks roared to a 134-99 victory due in large part to a 37 point effort by Chuck Hagen. The next meeting for the two best teams in the league was just 10 days away in Boston and the grocery lists were made in advance with the word eggs circled.

When the incident happened in Boston, Auerbach was quick to let the fans their know that it wasn't acceptable there as it should not have been accepted in St. Louis. Auerbach took to the public address system to speak to the fans and said "please stop and show them that our fans our better than theirs in St. Louis." The words of Auerbach restored order but he was not able to guide his team to victory. The Hawks took that game 125-111 and the seed of a rivalry had been planted, not only with the teams on the floor but the fans as well.

The Celtics would get the last laugh. They went 6-3 over the Hawks during the regular season with each of the contests being hard fought, the only game that was completely lopsided was the game in early January that had the Hawks prevail. The two teams would meet in the Finals with the Celtics taking the series 4-1 for their fourth Championship title in the history of the franchise. The third Boston victory came in front of those fans in St. Louis that made them feel so welcome.

As most of you know I'm from St. Louis. I don't remember the Hawks as they came before my time but I've always have had great interest in them. I stumbled across this fact while looking up another in an old newspaper archive and ran with it. In a lot of ways I find it to be funny but I can't help but not like how it might reflect on the city. I think it is always important to remember that a group of fans that causes a disturbance or a little bit of chaos does not reflect on a group as a whole. With the statements of Auerbach it makes me realize that that group of fans that threw things at players and coaches alike were out of control. It was a different time. Today a fan that thought he could do something like that might want to retain a lawyer first because a trip to jail would definitely be in their future.

I go to my fair share of sporting events and just thinking about walking through a turnstile with a dozen eggs made me laugh. I could only imagine the reception I might get from a ticket taker.