January 15, 1939: The First Pro Bowl Is Played At Wrigley Field in Los Angeles 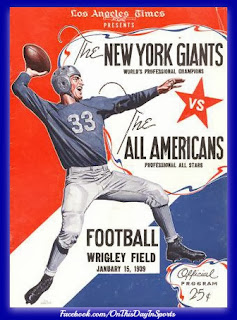 On January 15, 1939, the first Pro Bowl was held at L.A.'s Wrigley Field with the New York Giants knocking off the All American All Stars 13-10. The original concept for the Pro Bowl pitted the league champion against a handpicked group of men that were considered the best in the business. They might have been the best in the business on paper but that Giants squad was not about to lie down in the name of an exhibition game.

The first half was uneventful as the two teams went to their locker rooms knotted at three with the best of the game yet to come. In the third quarter, Washington's Sammy Baugh found his all star squad sitting on their own 30 and facing a second and inches situation, he hit Lions halfback Lloyd Cardwell at the 40 then Cardwell was off to the races and the finish line was the endzone. After the extra point the All Stars held a 10-3 lead that would be short lived. When the Giants quarterback Big Ed Danowski took over he walked his team down the field in quick succession on a 73 yard drive that began late in the third then would end with a game tying 22 yard pass to Chuck Gelatka. With less than five minutes to go in the contest Ed Goddard of the Cleveland Rams put the ball on the turf when he mishandled a punt, the Giants Orville Tuttle recovered and three plays later with the ball on the 17 yard line Ward Cuff  split the uprights to give the Giants a lead that would stand.

The game drew an estimated 15,000 people, it was a huge disappointment to those involved in making it happen. One reason stated was that it was a cold and foggy day in L.A. that kept the fans from filling the stands. The game was played in L.A. again the following season before being played in New York and Philadelphia in '41 and '42. While those that organized the event expected it to be an annual contest, World War II changed that as travel restrictions were put in place and the game was discontinued. It reemerged in 1950 and would take the name "Pro Bowl" with the teams being picked from the best in each of the league's two divisions.

This link will provide you with the rosters of each of the teams that took the field that day. The box score is wrong on the Wikipedia page which I confirmed through a variety of newspaper archives that I looked through to write this blog. http://en.wikipedia.org/wiki/1939_National_Football_League_All-Star_Game
Posted by Wade Forrester at 3:05 AM