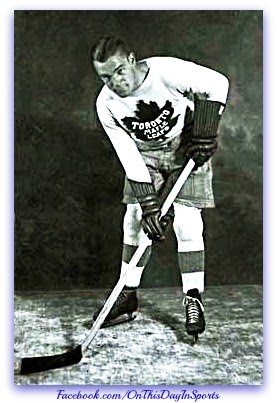 On January 19, 1932, Charlie Conacher became the first member of the Toronto Maple Leafs to record 5 goals in one contest. The effort was a part of an offensive explosion by Toronto that led to an 11-3 victory over the visiting New York Americans. To date, only 40 players in the history of the NHL have recorded 5 goals in one game and only eight players have accomplished the feat more than once.

The Leafs were on the board quickly after Conacher fired the puck past the New York goalie Roy Worters just 5 minutes and 33 seconds in. Later in that first period he grabbed an assist on a Hap Day goal that extended the Toronto lead to 2-0.

The second period was a wild one that had the puck end up in the net 6 times total with 4 of those going in for Toronto. The first two were notched by Conacher then things got even worse for the Amerks. Their starting goalie and future Hall of Famer, Roy Worters had to leave due to a knee injury and they turned to defenseman Allan Shields to take over in net. Shields watched Bob Gracie, Alex Levinsky, and Frank Finnagan fire the puck past him, then finally saw his team get on the board  with goals by Bert McInley and Tommy Filmore before the period came to a close.

With the score 8-2 after two periods, Conacher already had a hat trick under his belt and was ready for more when the puck dropped in the third. He rocketed a shot past Shields early in the period, then saw New York's Filmore pick up his second goal game before Baldy Cotton and Andy Blair added two more for Toronto. Conacher's fifth and historic goal capped things off for Toronto and ended the scoring rampage. Conacher's 5 goals are the reason the game will be remembered, however, the efforts of the men who surrounded him should be remembered as well. Only two of the Toronto players that stepped on the ice that day failed to get in on the scoring, and one of those two was the goalie Lorne Chabot. The other was winger Harold Darragh, he might not picked up a point but he sure did watch a show. Conacher was the only one with more than one goal in the scoring festival.

The 6 point effort by Conacher pushed him into the league lead in points with 29, he finished that season with 48 points total which was good for third. His 34 goals led the league and it is highly likely he would have gabbed the scoring title if he hadn't suffered a broken hand that cost him three weeks of the season. With the help of Conacher and his teammates the City of Toronto celebrated a Stanley Cup Championship at the end of that season. When those that sat in the stands talked about the best game during the regular season I bet they mentioned the night that the puck fond the net 11 times with Charlie Conacher leading the way.

If you would like to read more about the career of Charlie Conacher check this out: http://www.hhof.com/htmlSpotlight/spot_oneononep196102.shtml It was a remarkable career that ended with an induction into the Hockey Hall of Fame.

Here's the list of men who have scored 5 or more goals in one game: http://en.wikipedia.org/wiki/List_of_players_with_five_or_more_goals_in_an_NHL_game

Posted by Wade Forrester at 2:50 AM