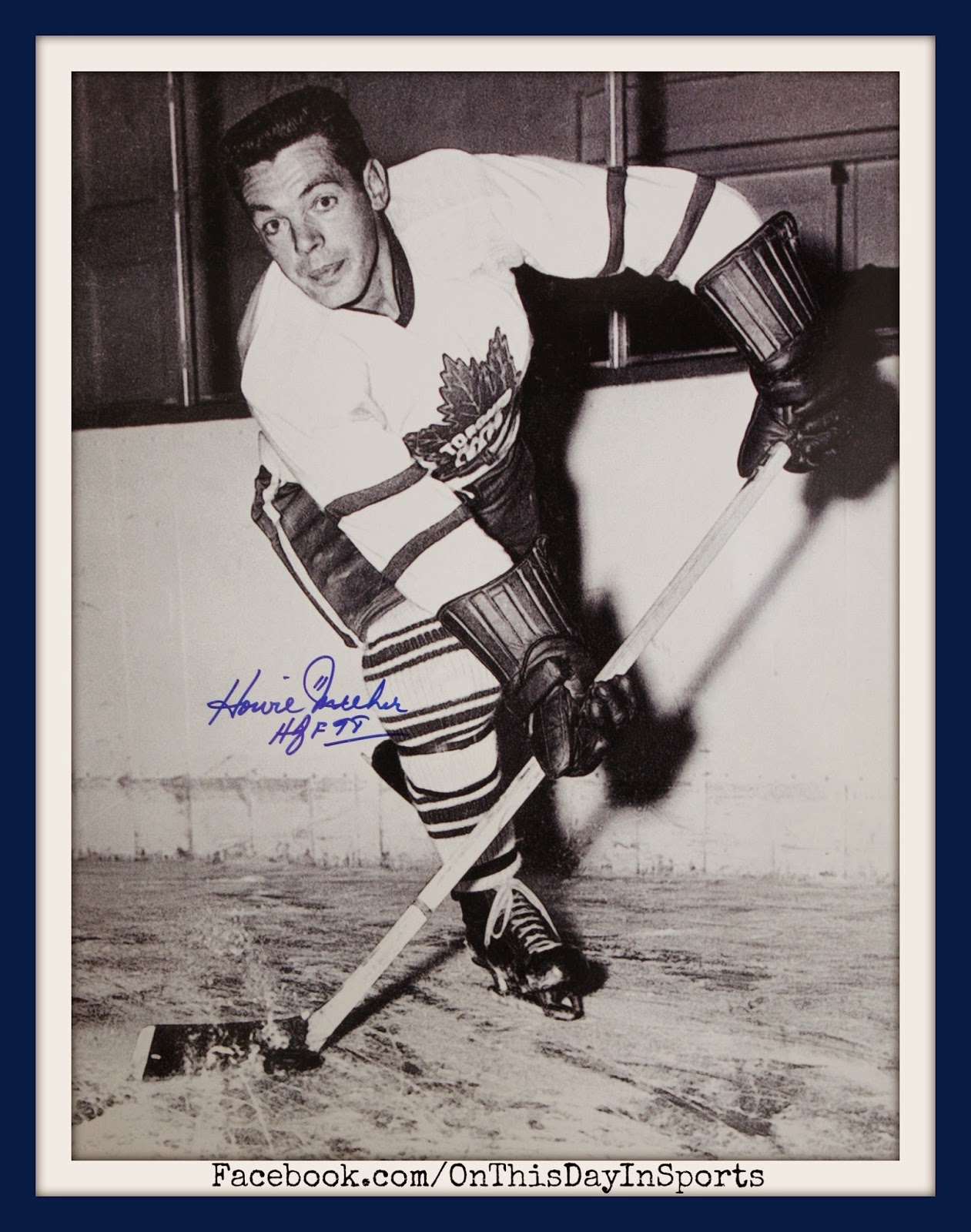 On January 8, 1947, Toronto Maple Leafs right winger set a rookie record when he scored 5 goals in 10-4 romp of the Chicago Blackhawks. The accomplishment by Meeker was highlighted that he had been wounded when he served during World War II and after fighting his way back from the injuries and serving out his enlistment he laced up the skates and pursued his lifelong dream of playing professional hockey. It was a dream that would be realized during that '46-'47 season when he found himself on the roster of the Maple Leafs. He quickly proved he belonged as he put together a solid season that ended with him not only winning the Stanley Cup but also taking home the Calder Trophy as the league's best rookie. The game that he scored 5 goals in came in front of a home crowd in Toronto, the Leafs had found themselves trailing 2-0 early before they tied things up in the second period. They added two more goals in the second period then added six more in the third while holding the Chicago offense to just two. The 5 goal performance by Meeker was the spark that caused the offensive inferno. The crowd in Toronto didn't even realize that Meeker had scored 5 goals, originally his first two were credited to Wally Stanowski but after the second period came to an end the officials got together and came to the conclusion that both of the goals were deflected into the net by Meeker. The press was informed of the change but the fans had to wait until an announcement that came after the game. To date, only one other rookie has tallied 5 goals in a single game with that being New York Rangers wingman Don Murdoch who accomplished the feat in October of 1976. Meeker finished that game with 16 goals on the season, he would add 11 more before season's end. He then capped things off by holding Lord Stanley's Cup above his head. Meeker spent 8 seasons on the ice, he scored 102 goals and finished with 185 points. That rookie season was his finest statistically but that did not stop him from being a very productive member of the team for 6 of those 8 seasons. Meeker's first three seasons ended with the Maple Leafs as Stanley Cup Champions as they proved to be one of the most dominant teams of the era. Following his playing days he spent some time coaching, jumped into politics, then finally found a spot in the broadcast booth. Meeker would make himself known as a broadcaster with a personality like no other. His broadcast career began in the mid 70's and would continue until he retired from 1998. Following his retirement he was inducted into the Hockey Hall of Fame as a broadcaster. Today Meeker is a 90 years old and living in Ontario. Nearly 70 years after he scored his record setting 5 goals as a rookie the record remains intact. Only 44 players in NHL history have scored 5 or more goals in a game and with only two rookies having the feat on their resume it is likely that the record will remain intact for many years to come.

You can read about Murdoch's record tying performance here: http://onthisdayinsports.blogspot.com/2013/10/october-12-1976-don-murdoch-becomes.html

Posted by Wade Forrester at 1:42 AM