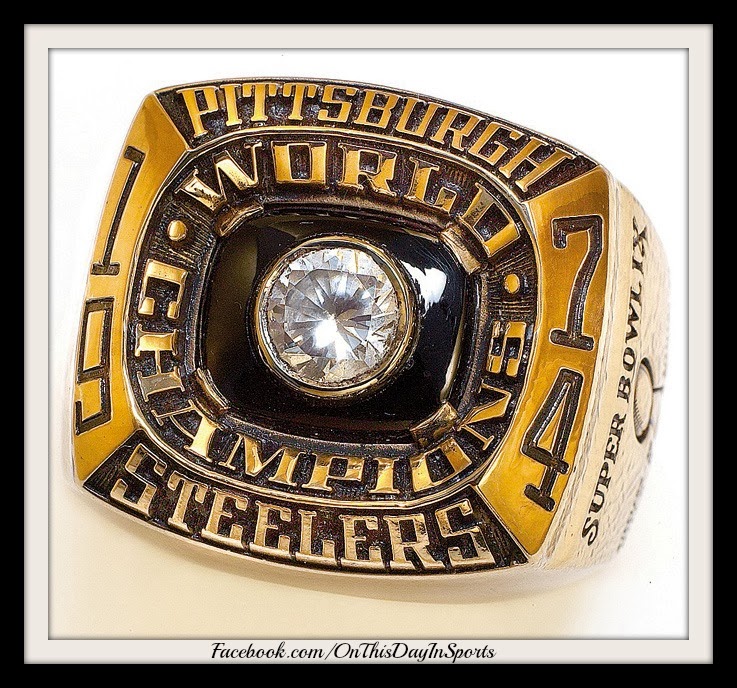 On January 12, 1975, with a 16-6 victory in Super Bowl IX, the Pittsburgh Steelers ended 42 years of frustration as they laid claim to their first title in franchise history. The Steelers were led by a record breaking 158 yard MVP effort by running back Franco Harris and the defensive dominance of "Mean Joe" Greene and company that put to bed any dream of a Super Bowl parade through the streets of Minneapolis. The first points of the game came on a safety, it happened midway through the second quarter when Minnesota's signal caller Fran Tarkenton was pinned deep and when he pitched the ball to running back Dave Osborn the ball was mishandled and ended up on the turf. An alert Tarkenton pounced on the ball in his own endzone as the Steelers defense came swarming in on him. It was the first time in Super Bowl history that a safety had been recorded and it was the only 2 points as the only score as the teams headed to the locker rooms at the half. To look up at that scoreboard as the two teams headed off had to be something as 2-0 is hardly what a fan of the game would expect. Neither of the offensive units could find their footing in the first half but that was about to change for the squad from Pittsburgh as they took the field in the third. The second half started off with Minnesota's Bill Brown fumbling the kickoff with the Steelers recovering on the Vikings 30. For a team that was struggling offensively it spelled disaster as Pittsburgh would employ a strategy that would produce points. That strategy was hand the ball off to Franco. On the first play following the fumble recovery, Harris took the ball and rumbled 24 yards to the Vikings 6, he was knocked back three yards on the next play but made up for it quickly when he punched it in with a 9 yard run that extended the Steelers lead to 9-0. The lead stood until a fourth quarter Steelers punt was blocked by Minnesota's Matt Blair who watched his teammate Terry Brown recover it for a touchdown in the endzone. It seemed like the Vikings had new life but Fred Cox missed the extra point and instead of a two point lead the Steelers were up by three. It really did not matter as that Steelers defense had no give in them that day. The proverbial nail would be driven after Terry Bradshaw led the Steelers on an 11 play 66 yard drive that included three third down conversions and was capped off with a 4 yard touchdown pass to Larry Brown. After Tarkenton was intercepted as he desperately tried to lead his team to a score the Steelers would become Super Bowl Champions. It was a long time coming.

The 158 yards on 34 carries by Harris surpassed Miami's Larry Csonka's total of 145 yards on 33 carries in Super Bowl VIII. It was a record that would be surpassed but Harris' 354 yards in four different Super Bowls stand as the most any rusher has picked up in the history of the big game. Harris made Bradshaw's job easy, he only passed the ball 14 times and completed 9 of those attempts, the strategy of handing the ball to the big man in the backfield was a sound strategy to say the least. On the flip side Tarkenton was beaten, battered, bruised, and banged up by the Steelers defense. He threw three picks and completed 11 passes on 26 attempts. The Steelers defense not only kept Tarkenton from having success, they also crushed any semblance of a running game by holding them to just 17 yards on the ground. Simply put, it was a dominant performance by those Steelers who had waited so long to bring their city a title. It was also the beginning of something special in Pittsburgh as more titles and glory were on the way.
Posted by Wade Forrester at 1:45 AM