January 27, 1982: The Trade That Brought Ryne Sandberg To The Windy City 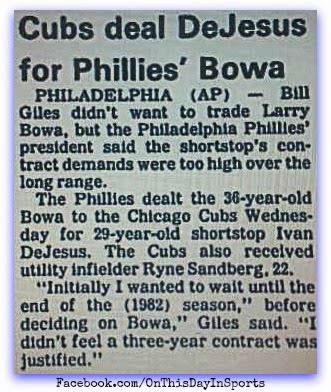 On January 27, 1982, the Philadelphia Phillies sent veteran shortstop Larry Bowa to the Chicago Cubs for another veteran shortstop Ivan De Jesus.... oh yeah the Cubs also got a 22 year old kid by the name of Ryne Sandberg who had appeared in just 13 games at the major league level. That 22 year old kid would go on to play 15 years in the Windy City and he became a legend along the way. The kid who was destined to have a spot in Cooperstown was almost an afterthought in the eyes of the newspapers that were printed in the following days, the focus was one the two veterans and the potential they might bring to their respective clubs, little did anyone know of the career that Sandberg had in store.

The owner of the Phillies, Bill Giles didn't want to move the 36 year old Bowa, he was a 2 time Gold Glover, a 5 time All Star and had been a key component in the 1980 World Series Championship run. The decision came down to deal him after contract demands exceeded what the Phillies could offer. De Jesus was 29, he appeared durable as he appeared in more than 150 games a year for the each of the previous 5 years in Chicago. He was coming off a season in which he hit .194 though; by all accounts it looked like the Cubs had clearly won this trade. If you looked at it without Sandberg included it might have almost been a push, when you throw Sandberg's name in there the clear cut winner was easily the Cubs. Today it is still considered one of the most lopsided trades in history of the game.

The Phillies just didn't have a spot for Sandberg and they believed he would ultimately be a utility man. He had hit .290 with their Tulsa affiliate and that is what caught the eye of the Cubs front office. Much like the Phillies, the Cubs also weren't sure about the position he would play. When you can hit a position will find you. The first plan was to have him play centerfield, that plan changed when Opening Day rolled around in '82 he was penciled in at third. He played 156 games in his rookie season and was a part of the conversation when it came to the rookie of the year after batting .271 with 7 home runs and 54 RBI.

With the successful rookie year behind him, a position change would come when the Cubs grabbed third baseman Ron Cey in a deal with the Dodgers. Sandberg moved over to second where he would spend the majority of his Hall of Fame career. In his first year at second base he won his first of nine consecutive Gold Gloves. In '84 he earned the league's Most Valuable Player Award after batting .314 with 19 home runs, 84 ribbies. He also led the league in runs with 114 that season and triples as well with 19. A model of consistency, Sandberg was selected to 10 All Star games and his power numbers rose to the point that he led the National League with 40 home runs in 1990, that same year he won the annual Home Run Derby. He was a fixture in Chicago that the fans and players alike had great respect for as he strived to be his best. He retired in 1994 then returned to the Cubs in '96 and played for two more seasons before retiring at the age of 37.

Over the course of his 15 years in Chicago, Sandberg truly achieved greatness, the team might have fell short in the postseason, but he gave those fans a lot to cheer for as he built his Hall of Fame resume. I'm going to reiterate a few of those numbers that earned him a plaque in Cooperstown, New York. Sandberg carried a .285 career average, he was a 10 time All Star, 9 time Gold Glover, 7 time Silver Slugger and picked up 2,386 hits, parked 282 home runs over the wall, and knocked in more than a 1,000 runs. Only one of those hits came in a different uniform and that happened in one of those first 13 games of his career in Philly.

When it came to the original headliners of the deal Bowa hit .296 over 4 years in Chicago, De Jesus hit .249 over three years in Philly. While they were the original focal point, a 22 year old kid that was largely written off  by most pundits then became the true story in the deal. It might just be the best deal that the Cubs ever made. It's sort of crazy how it went full circle and Sandberg is now managing the team that traded him so long ago.