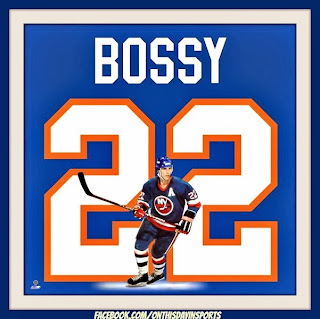 On January 2, 1986, in a 7-5 comeback win over the Boston Bruins, New York Islanders legend Mike Bossy became just the 11th man in NHL history to score 500 goals. The milestone came on a night that the Islanders organization had set aside to honor defenseman Denis Potvin who had surpassed Bobby Orr's record of 915 points just a few weeks earlier. Down 3-1 in the third, a Potvin slapshot deflected off the stick of Bryan Trottier and straight into the Boston net. The offense had found a spark but they would still have a battle on their hands as the Bruins would not go down without a fight. In fact, it was a barn burner that saw the two teams lighting the lamp and with time winding down in regulation they found themselves knotted at 5. Bossy had come into the game sitting on 498 career goals and with just two minutes left in the game he scored the go ahead goal to come within one of the historic mark. It was setup by Trottier and Bossy finished the job as he got it past the Boston goalie Doug Keans. With time winding down and the Islanders up 6-5 the Bruins yanked their goalie as they were desperate to score the equalizer. The strategy failed, with just 17 seconds to go Bossy put the puck in the back of the empty net after a quick breakaway. It was not the way he pictured #500, but it was a glorious moment nonetheless. At the time Bossy was 28 years old and he had just become the fastest to ever reach the 500 goal mark as he did it in 647 games. He had come a long way since his first goal against Buffalo's Don Edwards in October of 1977. The 4 time Stanley Cup Champion would finish his career with 573 goals and would be immortalized among the greatest to ever to take the ice when he was inducted into the Hockey Hall of Fame in 1991.

Watch the goal with a few words from Bossy here: https://www.youtube.com/watch?v=59zY6NnRevM
To date, 42 men have reached the 500 goal mark. If you think of all the men that have taken the ice in an NHL sweater being in the 500 goal club is an elite club to say the least. Bossy is currently ranked 20th on the all time list. You can view it here: http://en.wikipedia.org/wiki/List_of_NHL_players_with_500_goals