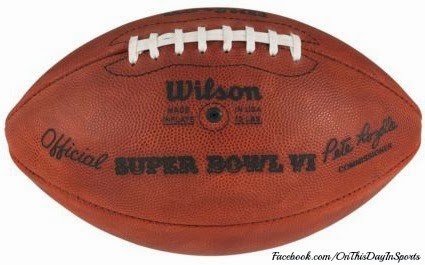 On January 16, 1972, with more than 80,000 in the stands at Tulane Stadium in New Orleans, the Dallas Cowboys beat the Miami Dolphins 24-3 in Super Bowl VI. The Cowboys were led by a defensive unit that would not bend, a running game that destroyed the Miami defense, and the arm of Roger Staubach who would earn MVP honors that brought the Cowboys their first Super Bowl title.

The Cowboys had posted an NFC best 11-3 record. One year earlier they had reached the Super Bowl but watched the dream of a championship disappear as they watched the Baltimore Colts score 10 fourth quarter points and take the title right out of their grasp as they were handed a 13-10 loss. It's hard to say but that defeat in Super Bowl V might have just lit a fire that would burn until the clock struck zero in Super Bowl VI.

The Dolphins posted a 10-3-1 record during the regular season and would play in an epic double overtime game in the first round of the playoffs that saw them prevail 27-24 over the Kansas City Chiefs. They knocked off the defending champions Colts in convincing fashion with a 21-0 victory that would lead to their first Super Bowl berth.

The Cowboys came out as a team on a mission and anything that was in there way would be run over, knocked down, and beat into submission as they held the Miami offense to the lowest scoring total in the Super Bowl history. The tale of the tape is definitive tale to say the least. The Cowboy pounded out 252 yards on the ground with the combined efforts of Walt Garrison and Duane Thomas who rattled off 169 yards put together then Calvin Hill, Bob Hayes, Mike Ditka and Staubach each had runs of their own that would add to the rushing totals. 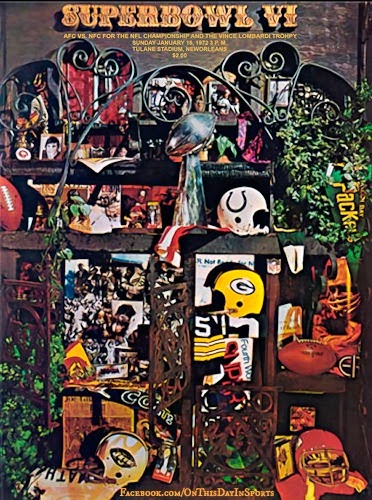 The Cowboys picked up three points in their second possession. It came after Larry Csonka fumbled the ball on on the Dallas 47, and was recovered by linebacker Chuck Howley. Staubach took over and marched his team down the field on an 11 play drive that stalled in the red zone. Mike Clark split the uprights with a 9 yard field goal to put the Cowboys up 3-0 with 1:23 left in the first. The score stayed the same until late in the first half when Staubach and company took over on their own 24. As the quarterback handed off the ball then fired in key passes when necessary they moved right down the field until Staubach found tight end Lance Alworth on a 7 yard strike that ended in the endzone and put the Cowboys up 10-3. Following the Dallas touchdown, Miami quarterback Bob Griese looked to get things going as he found his star wideout Paul Warfield on a 23 yard gain that positioned the Dolphins at the Cowboys 24. With time winding down quickly Griese looked to Warfield again in the endzone only to have the ball hit him in the stomach. The Dolphins had to settle for a Garo Yepremian field goal and the score sat at 10-3 as the two teams headed to their locker rooms.

When play resumed the Staubach and company put together a 71 yard drive that was capped off with a three yard touchdown dash by Duane Thomas 3 yard touchdown dash that gave Dallas a 17-3 lead. Midway through the fourth quarter Chuck Howley came up with the ball once again when he picked off Griese and ran 41 yards before his own momentum sent him crashing down. After two short runs with minimal gains Staubach hit veteran tight end Mike Ditka on a 7 yard touchdown pass that finished off the scoring efforts of the Cowboys. 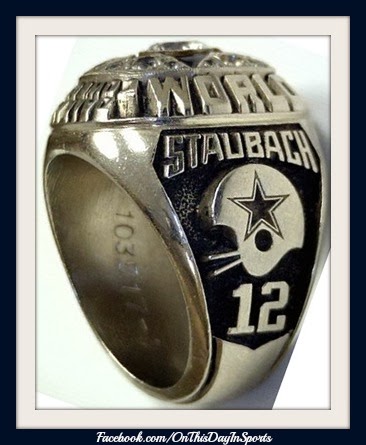 At the end of the day Staubach went 12 of 19 for 119 yards and 2 touchdowns. By comparison Griese went 12 of 23 for 134 yards with a pick. While Griese took home MVP honors that Cowboys defense could have won the award collectively. They blanketed Griese's favorite target Paul Warfield throughout the game limiting him to just 39 yards with 23 of those yards coming on one play. They also held the Dolphins running game in check as they limited the two headed monster known as Jim Kiick and Larry Csonka to 40 yards apiece. The running game for the Cowboys could have taken the MVP award as well, they ran the ball a total of 48 times and the 252 yards set a Super Bowl record. The list of players go on and on when it comes to that award as they played a brand of football that brought home a Championship title.

Up to that point the Cowboys carried the label "they can't win the big one" they not only won the big one they did it with pure dominance. They had reached the title game in '66 then again in '71 before they could say they definitely could win the big one. It would take some time but Staubach and the Cowboys would win it again in January of '78 when they knocked off the Vikings in Super Bowl XII.