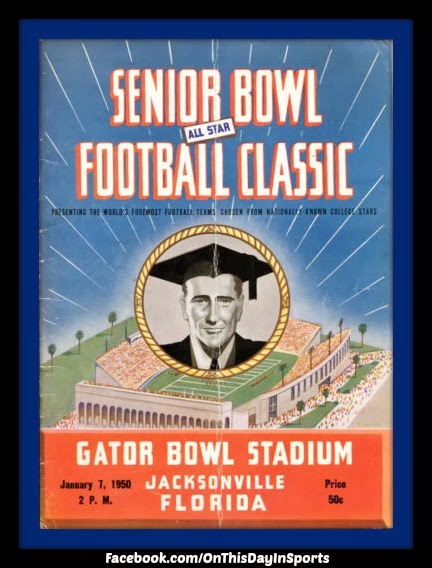 On January 7, 1950, with a two touchdown performance Auburn quarterback Travis Tidwell led the Southern collegiate all stars to a 22-13 victory over the Northern squad in the first ever Senior Bowl that was played in front of 20,000+ in Jacksonville, Florida. This marked a beginning of an annual event that would shine a light on the greatest college players in the nation with many of them set to embark on professional careers in the NFL. Tidwell would always be remembered for leading Auburn to their first victory over Alabama in more than 40 years one season earlier and he would always be held in high regard among the Auburn faithful. As a freshman he led the country in total offense which was something he would do again in his senior season which led to the invitation to the inaugural event. Tidwell had to contend Southern Methodist running back Doak Walker who suited up for the North. The "North" squad was made up of players from all sections of the country besides the Southeastern conferences and the most southern conferences in the nation. Walker helped the North jump out to an early lead before Tidwell was able to answer back with a touchdown pass late in the second quarter. The first score came after Walker ran a punt back 67 yards, it was said that he cut back across the field twice as he danced around defenders on his way to giving his squad great field position. With the efforts of Doak and Pacific quarterback Eddie LeBaron the North moved quickly on a scoring drive that was finished off by Michigan State running back Lynn Chandnois. In the second quarter LeBaron connected with Oklahoma's Jim Owen on a 46 yard bomb that extended the North's lead to 13-0 after Walker missed on the extra point. Charley Justice out of North Carolina  provided a much needed spark for the South when he broke off a 33 yard return on the ensuing kickoff. Tidwell followed it up with a 52 yard touchdown pass to Herb Rich of Vanderbilt and suddenly the score was 13-7 and the South was on the way back into the contest. It took two grinding drives for the South to take the lead, the first was an 80 yard drive that ended in disappointment as Texas' Ed Price fumbled the ball at the goal line. The second drive would end much better than the first for the South, it began with an excellent punt return by Herb Rich that had the ball sitting on the 50, then Tidwell passed and ran his way down the field before finding Wake Forest's Red O'Quinn on a quick pass from the 15, O'Quinn found it in his hands at the 10 and saw daylight in front of him as he dashed tot he endzone. When Tulane's Dick Sheffield converted on the extra point the South had a lead that would not be relinquished. With the slim one point lead intact Tidwell and company needed a little insurance so the foot was kept on the gas pedal. After another solid punt return by Justice positioned the South at the North 40, Tidwell nearly picked up his third touchdown of the day when he connected with Rich once again on a 40 yard hookup that ended with the ball sitting at the two yard line. Price made up for his earlier error by punching the ball in and adding the score that would provide some breathing room. In the last 5 minutes of the ballgame Wake Forest's Jim Duncan provided the last two points with a blocked punt in the endzone that gave the South a safety and capped off the scoring in the first ever Senior Bowl. Many of the young men that played in that game would go onto have long professional careers and some of them would even end up in the Pro Football Hal of Fame. Some of them most definitely increased their draft stock in their last opportunity to shine as a member of the collegiate ranks. One of those men that benefited by his stellar performance was the game's MVP Travis Tidwell, he was taken by the New York Giants 7th overall. His NFL career was short, after just two seasons in New York he headed North and played in the CFL. After his playing days ended he coached briefly before turning his attention to business ventures. He would go onto have children and make many more memories during his life before he passed away in 2004. Some of his fondest memories had to have come when he was taking snaps with that Auburn helmet on.

After the 1950 Senior Bowl did not reach expectations in attendance it was moved to Mobile, Alabama where it is still played today.