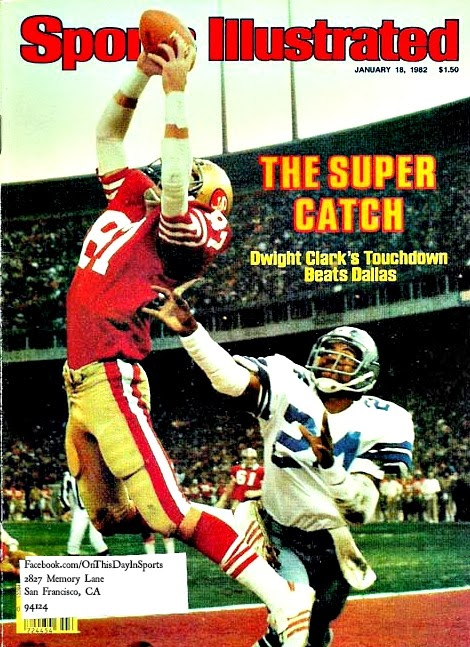 On January 10, 1982, with just 51 seconds to go in the NFC Title game at Candlestick Park in San Francisco, Dwight Clark made the place erupt when he made a leaping fingertip grab in the back of the endzone that came his way from quarterback Joe Montana to give the Niners a 28-27 lead over the Dallas Cowboys after a Ray Wersching extra point. It was a lead that would stand and Clark's catch was one that would punch a ticket to Super Bowl XVI. The game was a battle for the ages that saw the lead exchange six times. It was that last lead change that will never be forgotten as Montana rolled out to his right and after not being able to hookup with his primary receiver he found a waiting Clark who made the catch of a lifetime. The seesaw battle had San Fran on top early after Freddie Solomon snagged an 8 yard touchdown pass from Montana. It was a short lived lead, before the first quarter was in the books Dallas' kicker Rafael Septien booted a 44 yard field goal and Danny White found Tony Hill on a 26 yard touchdown grab to put the Cowboys up 10-7. Montana answered with a touchdown pass to Clark in the second before a controversial interference call nullified a Ronnie Lott interception and gave Dallas the ball at the Niners 12. Three plays later Tony Dorsett put the Cowboys back on top with a 5 yard run that gave them a 17-14 lead. In the third San Fran jumped back in front with a 2 yard touchdown run by Johnny Davis that gave them 21-17 advantage, but it quickly shrank to a one point lead when Septien kicked a 22 yard field goal early in the fourth. The hopes and dreams of a Super Bowl berth for the 49ers looked to be in peril when Danny White put the Cowboys back in front with a 21 yard touchdown pass to Doug Cosbie that gave them a 27-21 lead with just 4:54 left on the clock. When Montana and company took over, they had 89 yards in front of them, they had been stopped dead in their tracks on their last two drives and with time winding down the hill that was in front of them loomed large. It was a hill that would be climbed in a methodical motion. Running back Lenvil Elliott ran the ball twice for 17 yards. Montana passed to Solomon for six yards and Earl Cooper for another five that positioned his team at the Dallas 49. Solomon  moved the ball 14 more yards on a reverse around the left side then Montana found Clark with a 10 yard pass before hitting Solomon on a 12 yard gain that put them on the Cowboys 13. A sweep by Elliott put the ball at the 6 and history was about to be made. The call came on third down, it was the same play that Solomon had scored on in the first quarter, this time Montana had to improvise as the Cowboys secondary were blanketing his receivers, as he rolled out the Cowboys defense crashing in around him and Montana sailed a high pass to the endzone towards Clark, it was said that Clark jumped higher than he had ever jumped before to make the catch and once it was in his hands that the Richter scale broke as the cheer of the crowd shook California. With 51 seconds left on the clock the Cowboys went into desperation mode, Danny White found Drew Pearson on a pass play that nearly ended up in the endzone only to have Niners cornerback Eric Wright make a huge tackle that denied the score. Two plays later, Lawrence Pillers sacked White causing a fumble that was picked up by Niners lineman Jim Stuckey and victory was theirs. The excitement in San Francisco was like nothing they had seen before. This was the first time the Niners would have a shot at a Championship Title since they had joined the NFL in 1950. It was the beginning of one of the finest dynasties that the NFL has ever seen as they traveled to Detroit, Michigan and toppled the Cincinnati Bengals 26-21 to become Super Bowl Champions. With the Candlestick Park era coming to a close "The Catch" was recently ranked #1 as the best football game ever played in that stadium. It was a moment in time that will stand the test of time.

You can watch the famous grab here: https://www.youtube.com/watch?v=u70qV-6QRuQ

Here is the Box score: http://www.pro-football-reference.com/boxscores/198201100sfo.htm

On that same day the Chargers and Bengals played in the "Freezer Bowl" which was an epic contest that saw the temperature plummet below zero. You can read about it here: http://onthisdayinsports.blogspot.com/2013/01/january-10-1982-freezer-bowl.html

Posted by Wade Forrester at 2:44 AM