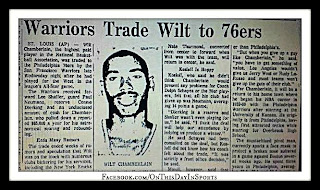 On January 13, 1965, following a 124-123 victory for the East in NBA All Star game that was held in St. Louis, it was announced that San Francisco Warriors had traded Wilt Chamberlain to the Philadelphia 76ers. The Warriors received Connie Dierking, Paul Neumann, Lee Schaffer and an estimated $300,000 in cash. By today's standards that would be $2.2 million. Out of the players shipped to the Warriors, only Neumann had seen real playing time as he was averaging 14 points per game. It was a far cry from Wilt's dominance on the court, he was a perennial all star, had led the NBA in scoring for 5 consecutive years and was on his way to another scoring title as he was averaging nearly 40 points per game in his sixth year in the league. With the trade announced it ended weeks of speculation as to where the 7 foot 1 big man would play next. The Knicks and the Lakers made offers that were rejected before the 76ers made an offer that the Warriors accepted. It proved to be a great deal as it helped bring a championship to the Sixers in '67. It was his only title in Philly through three and a half seasons of play. I'm sure those that followed that team were glad to see him play in their city and many of them hated to see him go to Los Angeles in the Summer of '68 where he would win another title in '72.

Here's a link to a neat little side story from the night Chamberlain was traded to the Sixers. It was said that the Chamberlain trade happened at a little restaurant that was known as Stan Musial and Biggie's, which was owned and operated by Stan The Man Musial and his partner Biggie Garagnani.
http://blogs.riverfronttimes.com/dailyrft/2012/04/wilt_chamberlain_trade_1965_st_louis_stan_musial.php