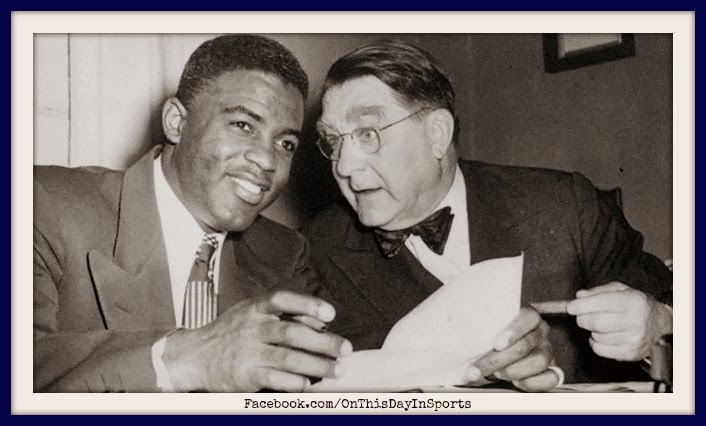 On January 24, 1950, Jackie Robinson inked a one year deal with the Brooklyn Dodgers. The contract guaranteed the 31 year old $35,000, making him the highest paid man in the history of the franchise. By today's standards that $35,000 would equate to $338,000 and it's safe to say that Robinson earned every single penny.

After breaking through baseball's color barrier in 1947, Robinson proved to be one of the best players in the game. He had taken home rookie of the year honors in '47, then in 1949 he was selected to the All Star game, won the National League Batting Title, and took home the National League MVP award as well. When Robinson first signed on with the major league club for $5,000, after his stellar rookie year his pay increased to $14,000, then $21,000 a year later. Following that MVP season in '49 Jackie made it known that he would seek a substantial pay raise after the club mailed him a contract he deemed "not satisfactory" after the threat of  a holdout a meeting with owner Walter O'Malley and General Manager Branch Rickey was arranged and within minutes of the doors closing behind them the deal was made.

O'Malley knew the value of Jackie Robinson and even with his star second baseman receiving a raise of more than $22,000 he knew that in many ways it was a bargain. The previous Spring the Dodgers saw record crowds attend Spring Training exhibition games and the organization knew who they were there to watch. When asked about the negotiations Rickey said "He told me what he thought what he should get and I agreed. It was just like that." When Robinson spoke about it he agreed with Rickey's assessment then said with a big smile on his face "It didn't take me more than three minutes to sign the contract. It is a very generous one."

With the deal in place Robinson would embark on another All Star season and would continue a career that was destined for the Hall of Fame. He played with the Dodgers until his career came to a close in 1956. The most money that Robinson ever made was $39,750 and over the course of his nine years in the big leagues he made close to $300,000 total. That would equal more than $3 million today and In the age of the monster contract we often hear that there is no player that is worth the money that is being tossed around, when it comes to Robinson, his value in baseball and society combined far exceeds any dollar amount that has been mentioned in this article.