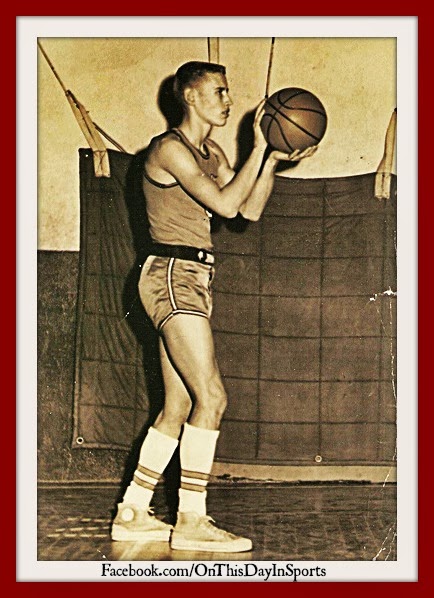 On January 26,1960, the Heat was on in Burnsville, West Virginia when high schooler Danny Heater set a world record for most points scored in basketball game at any level with a 135 point performance. The six foot Burnsville guard scored 50 points by halftime then knocked down another 85 in the second half as he etched his name in the record books. No player at the high school level has yet to surpass the 135 point game that Heater put together and more than 50 years later the record seems nearly untouchable. Since 1913, only 19 males and five females players have crossed the 100 point threshold in basketball at the high school level. The closest challenger to Heater's unbelievable record was a kid named John Morris out of Portsmouth, Virginia who dropped 127 in a 173-47 beatdown just one year later.

Before the game even began, Heater's coach Jack Stalnaker and teammates alike encouraged him to go out and break the state record, which stood at 74 points. The coach thought that if he could break that record it would catch the attention of college scouts. There was no way that Heater's family could afford to send him to school and that coach had faith in him and his ability to achieve success as a collegian, he saw it as a ticket. Heater almost didn't go along with it, as we all know when we play team sports it's about the team and not about one man.The kid didn't score for the first two minutes and thirty eight seconds, Stalnaker burned an early timeout and pulled Heater to the side and told him they were doing this for him, if he was thrown the ball, he needed to not dish it off to a teammate, he needed to score. That was a turning point. When Heater got the ball in his hands the next time he dropped it in with a layup, it was the first two points in what would be a history making performance.

With 50 points by halftime everyone involved knew that the record would be surpassed and it didn't take long. The 74 mark was eclipsed just 10 minutes into the second half. Heater thought that was where the day would end and was expecting to come out of the contest, then his teammates told him to get back out there and go after the National record which had been set by Dick Brogenrife out of Ohio in 1953. Heater went back out there and in what he described as a dream, everything he put up fell through the hoop. In the last ten minutes he dropped 55 points. He was dominating the other team in a way that probably made them want to catch a quick bus out of there.

Once the news spread into Charleston he had his moment in the sun, with fan mail pouring in, his picture in a weekly national sports magazine, and even had the Basketball Hall of Fame call and have him sign a commemorative postage stamp. Unfortunately, it was just a moment in the sun. Heater suffered a severe ankle sprain that led to poor performances and unimpressed scouts. He did receive a scholarship offer from the University of Richmond but he suffered a back injury in a car accident, then his family's home burned to the ground and he had to return home. Sometimes that's the way life takes a person. He moved on, found work, got married and lived a life that he still lives today in West Virginia. In 1988, the Lakeland Ledger published a story that was about how Heater was waiting for the day that the world record would fall, that was 28 years after the record setting game, he had to wait another 24 years before it finally happened when Jack Taylor out of Grinnell College surpassed him with a 138 point performance in 2012. While the world record is no longer owned by Heater, the high school record remains intact. The most recent high schooler to surpass the 100 point plateau came in March of 2013 when Herman Saygar out of Culver, Indiana dropped 113 in a game his team won by the score of 154-10.

I jumped out of the box with this fact a little. I think it's the first fact that I have used from a high school event. I have a rule; if it intrigues me dig on in and that's what I did here. While we sometimes like to say a record is unbreakable, you never know when it might just happen. It truly is something I love about sports, any time you attend a sporting event at any level you might just witness something historic. The way I see it is each event has it's own place in the history books, some just rise to the top. Danny Heater rose to the top.

You can view the list of 100 point scorers here: http://en.wikipedia.org/wiki/List_of_basketball_players_who_have_scored_100_points_in_a_single_game#High_school