January 23, 1944: The Red Wings Destroy The Rangers In The Most Lopsided Game In NHL History 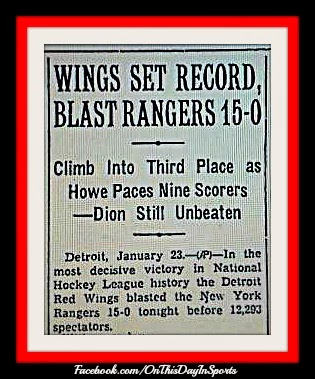 On January 23, 1944, the most lopsided contest in the history of the NHL was played in Detroit with the Red Wings destroying the New York Rangers 15-0. The Wings started at what most of us would consider a normal pace with two goals in the first period then progressively got stronger. They notched five more in the second, then eight more in the third, as they set a record that is likely to never be broken.

More than 12,000 fans packed the stands at the Olympia to watch their Red Wings take on the visiting Rangers and by the time the clock ran out they had witnessed history. The New York goalie, Ken McAauley faced 58 shots in the beatdown, he might have turned 43 of them away but he could not stop the scoring of the Red Wings. In fact every man on the Red Wings roster besides defenseman Cully Simon and the rookie goaltender Connie Dion got in on the scoring. Dion only faced 9 shots in the contest which was a far cry from the onslaught that was bestowed on McAuley. It was the fifth victory in a row for the Detroit netminder who had been recently discharged from the Canadian Army.

Nine different Detroit players found the back of the net with Syd Howe's three goals leading the way. Murray Armstrong, Carl Liscombe and Don Grosso each grabbed two goals while Harold Jackson, Adam Brown, Bill Quackenbush, Ken Kilrea, and Mud Bruneteau all scored one. Syd Howe's hat trick made him the all time scoring leader in the history of the franchise with 149 which was one more than Herbie Lewis had recorded in that same uniform.

Surprisingly enough the 15 goals is second on the all time list of most goals scored in one NHL contest. That record belongs to the Montreal Canadiens who scored 16 goals against the Quebec Bulldogs in 1920, the Bulldogs did score three times in that affair so it wasn't quite as lopsided as that game in Detroit in 1944.

Posted by Wade Forrester at 1:07 AM