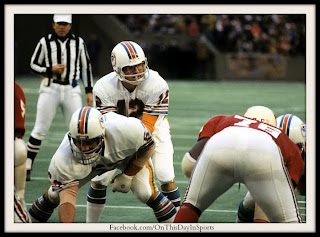 On November 24, 1977, Miami Dolphins quarterback Bob Griese torched an injury depleted St. Louis defense for six touchdowns in a 55-14 route over the Cardinals in a Thanksgiving Day matchup in St. Louis. Griese and company were in control in all aspects of the game. The Miami quarterback connected with wideout Nat Moore for three of the six touchdowns. The first two drives by the Dolphins ended in the endzone with Moore hauling in the first from four yards out, then connected with Duriel Harris on a 7 yard strike. Jim Hart walked the Cardinals down the field on the following kickoff and capped it off with a one yard run by Terry Metcalf to cut the lead to 14-7. That was the closest they would get as the Dolphins took a stranglehold on the ballgame. The running game was setting up the pass and the offensive line was letting Griese do his job at ease. In the second quarter he connected with Moore on a touchdown from 9 yards out, then hit him again with a 28 yarder that ended with 7 more points. With the score 28-7 at the half and 3 touchdowns under his belt Griese was rockin and rollin and the same old song and dance would continue in the second half. In the third he hit Gary Davis on a 17 yard catch and touchdown then he followed it up with his longest touchdown pass of the day hauled in a 37 yard pass that was Griese's sixth touchdown of the day and extended the lead to 41-7. It was simply an ass whoopin and the Dolphins weren't done whoopin that ass. Leroy Harris extended the Dolphins lead to 48-7 with a four yard rush before the third quarter expired then the Cardinals finally answered back with a 19 yard touchdown pass to Ike harris from Jim Hart. The beatdown came to a close with a touchdown run by Benny Malone that capped off the 55 Dolphins points. The story of the day was Griese. I know when I see a six touchdown headline I would expect to read about how the quarterback threw for 350 to 400 yards. That wasn't the case for Griese, he went 15 for 23 and threw for 207 yards in this one. The running game might have been overlooked a bit, collectively they rushed for 295 yards as they handed the Cardinals the biggest defeat they would suffer in their time in the Gateway City.  It not only snapped a 6 game losing streak for the Cardinals, it also started a streak of 12 straight losses for St. Louis.