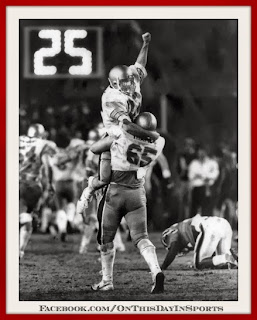 On November 23, 1984, Boston College quarterback Doug Flutie launched a last second hail mary that landed in the hands of his receiver Gerard Phelan giving the Eagles a stunning 47-45 victory over Hurricanes at the Orange Bowl in Miami. The last second miracle capped off a quarterback duel for the ages. Miami's Bernie Kosar completed 25 of 38 passes for 447 yards and two touchdowns while Flutie hit on 34 of 46 for 472 yards and three touchdowns. The Hurricanes looked to have the game at hand when Melvin Britton scored on a one yard blast that gave them a 45-41 lead with just 28 seconds to go in the game. With less than a half a minute to go and an 80 yard drive in front of him Flutie knew he had four plays to try and pull off the improbable. He quickly went to work and got the his team to mid-field. The winning play might have started at the Eagles 48 but all in all it covered 64 yards through the air as Flutie was flushed out of the pocket then put it in the air and prayed for a miracle. His prayers were answered as Phelan came up with the ball and Boston College secured the victory. It was a simply unbelieveable play that will stand the the test of time. In that same game the 5 foot 9 Boston College quarterback became the first signal caller in the history of NCAA Football to pass for 10,000 yards. He finished the day with 10,303 passing yards. Flutie would go onto win the Heisman Trophy that year before embarking on his career at the professional level.

Posted by Wade Forrester at 1:13 AM