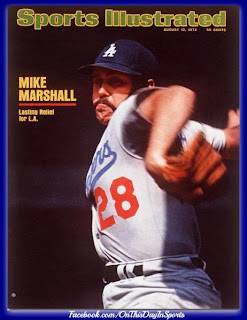 On November 6, 1974, Los Angeles Dodgers hurler Mike Marshall became the first relief pitcher in the history of Major League Baseball to win the Cy Young award. Marshall's season was one for the ages as he put together one of the greatest Iron Man pitching performances in the history of the game. Marshall broke two records for relievers on his way to winning the Cy Young. He appeared in a record setting 106 games and threw in 208 innings all in relief, both records still stand today. During the regular season Marshall set another record by appearing in 13 consecutive games in late June and early July and finished a total of 83 games for the 102 win Dodgers who would end up in the World Series. Marshall finished the season with a 2.4.2 E.R.A., 15 wins, and a  league leading  21 saves. He received 17 of the 24 first place votes and beat out his teammate Andy Messersmith who posted a 20-6 record on the year as a starter. In the day and age of the specialist it is very likely we will never see a reliever turn in a season like the one Mike Marshall did in 1974.