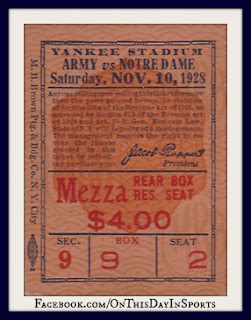 On November 10, 1928, with more than 80,000 fans in the stands at Yankee Stadium in New York, the Notre Dame Fighting Irish pulled off a stunning 12-6 come from behind win over an undefeated Army team. It was in this game that the famous "Win one for the Gipper speech" was given to the Notre Dame squad during halftime of the hardly fought contest. The "Gipper" was in reference to George Gipp. He was an all american who was stricken by illness in December of 1920 and suddenly passed away at the age of 25. The head coach of the Irish, Knute Rockne spoke with Gipp when he was on his deathbed and he told his coach "I've got to go, Rock. It's alright. I'm not afraid. Some time, Rock, when the team is up against it, when things are wrong and the breaks are beating the boys, ask them to go in there with all they got and just win one for the Gipper." These words were something Rockne never forgot and on that day his 4-2 Irish were taking on a team that many considered unbeatable, he told his kids what Gipper said to him that day before he said to them "this is the day and you are the team."  Both teams had failed to put points on the board in the first half which led Rockne to delivering the speech that would fire his boys up. However, it was Army that struck first. The Cadets scored on a long trick play in which their running back Christian Cagle aired one out to Edward Messinger that set up a two yard touchdown run by John Murrell. Undaunted, Notre Dame came right back. They drove the ball all the way to the goal line where Jack Chevigny punched it in. After he scored the game tying touchdown he jumped up he yelled "that's one was for the Gipper." In the next Notre Dame possession, they drove to midfield before missing a long field goal. Army went 3 and out deep in their own territory and were forced to punt. The Irish began the legendary drive that would make this game one for the ages. They drive all the way to the Army 35 yard line before they stalled and faced a do or die fourth down. Rockne made a call that would lead to victory as he substituted in  Johnny O'Brien at receiver. O'Brien ran over to quarterback Frank Carideo and whispered something then went to his set position. As soon as the ball was snapped O'Brien was off to the races, Carideo handed off to halfback Johnny Niemiec who faked a run around the left side before he put the ball in the air where O'Brien hauled it in at the ten yard line before working his way around two defenders for the score. The Notre Dame squad was overjoyed as they had taken a 12-6 lead. Even then the game was not over. Cagle took the kickoff and ran it back 55 yards to the Irish 30 yard line and just minute left to play. In a desperate move the Cadets coach Biff Jones pulled his running backs and opted for receivers as they attempted to tie it back up. They were able to get it down to the 3 yard line, but with no backs in the game to try and punch it in time quickly expired before they could get another play off. The Notre Dame Fighting Irish had won one for the Gipper.

With a movie made about Rokne in 1940 the speech made it to the silver screen. Some of it might be myth, but one thing is for sure. The Notre Dame Fighting Irish proved that day that they would fight to the end and because of that they were rewarded with a thrilling victory.