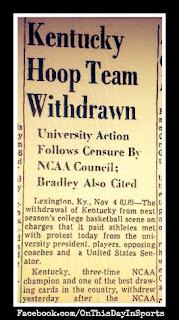 On November 3, 1952, it was announced that the University of Kentucky's basketball 21 game schedule would be cancelled after an NCAA investigation uncovered numerous rule violations that dated back to 1948. The decision to cancel the season came after it was announced that the NCAA would recommend that all athletic programs at the school would be put on probation during the '52-'53 seasons. The NCAA said that some athletes received pay and some were illegally certified as eligible for NCAA participation even though the head coach of the team Adolph Rupp and his assistants knew they were ineligible. One year earlier several former players were arrested on charges of shaving points during the NIT, while the team went onto win the National Championship the seed had been planted that would lead to the first ever "death penalty" that would be enforced in the history of college basketball. In each of the years that followed players from the Kentucky squad were accused of taking money and gifts until the arrests were made in October of '51. Kentucky wasn't the only school implicated in the scandal, Bradley out of Peoria, Illinois was also caught up in it and would be forced to sit out the NCAA tournament in 1953. Neither school fought the sanctions but Rupp made it clear that he thought the punishment was harsh and that the players should be held accountable and not the entire school. Rupp had been the head coach at Kentucky since 1930 and had built them into a powerhouse in the ranks of college basketball. He had guided the Wildcats to titles in '48, '49, and '51 before being rocked by scandal. After the cancelled season the Wildcats came back with a vengeance, Rupp coached the team to a 25-0 record and finished #1 in the AP poll. Before the tournament began the NCAA ruled that three of the players on Rupp's squad were deemed ineligible because they had graduated in the previous academic year and the coach decided to sit out the tournament in protest due to the actions of the NCAA. It seems that even after the year lost the program felt lingering repercussions of the mess that had been made. Rupp and the Wildcats did return to prominence and he did guide them to another National Championship in 1958. However, the scandal was something that Rupp and anyone else involved did not soon forget.

Posted by Wade Forrester at 1:19 AM