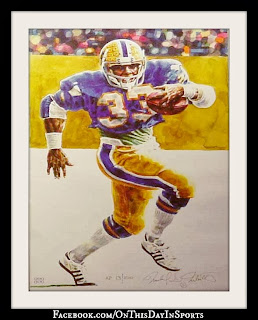 On November 15, 1975, in front of 56,480 screaming fans in Pittsburgh,Tony Dorsett's 303 rushing yards led the unranked Pittsburgh Panthers to a 34-20 upset over the ninth ranked Fighting Irish of Notre Dame. The Irish came into Pittsburgh ranked ninth in the Nation while Pitt sat on the outside looking in at the top 20 teams. Dorsett's rushing performance broke his own school record of 268 that he had set in a game against Army earlier that season. Dorsett's biggest runs of the day came in the first half. He rattled off a 57 yard gain on the first drive before quarterback Matt Kavanaugh punched it in from the three yard line. Dorsett's next big run was his longest run of the day. It was a 71 yard sprint to the endzone that gave his Panthers a 14-10 lead. After the team traded field goals Dorsett was on the receiving end of a Matt Kavanaugh flip pass that he took 49 yards and opened the Pittsburgh lead to 24-13 to cap off the scoring in the first half. As he headed to the locker room Dorsett had racked up 161 yards on the ground. He would rumble for 142 more in the second half as Pitt ran away with the big victory. Both teams came into the game with a 7-2 record, with Notre Dame being ranked #9 they had a major bowl bid on the line and because of the loss they were eliminated  from consideration. On the other hand, Pitt secured themselves a spot in the Sun Bowl thanks in large part to their running back that ran wild on the Notre Dame defense. Dorsett seemed to play some great ball against the Irish. Just two years earlier as a freshman Dorsett ran for 209 yards against the team from South Bend, Indiana and a year after his 303 yard game he turned in a 290 yard performance against them. I would imagine Dorsett kept a few coaches up at night as they wondered how in the hell they were going to stop him. The lost sleep wasn't worth it because they weren't stopping him.

On this day that I use this fact about the great Tony Dorsett I just want to say I wish him and his family the best. He was recently diagnosed with a degenerative brain disease that is directly related to the abuse his body took while playing the game of football. I like many of you love watching the games and look forward to seeing who might be the next player to have a record setting day like Dorsett did in 1975. With that said, I do feel sad for these players that are suffering later in life. I hope that medical advances can help players in the future not have to go through what him and his family are going through now. I do apologize for ending it on a sadder note but we can not ignore something that is so tragic. I think that sometimes people forget these guys are just people like you and me. They have family and many other people that care about them well beyond the gridiron and I hope for their sake they can figure out how to make it safer so the kids strapping on a helmet these days don't have to suffer the same consequences down the road.