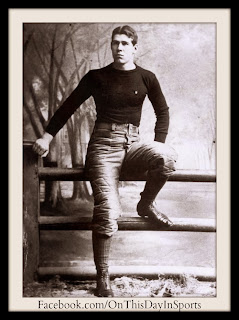 On November 12, 1892, guard William "Pudge" Heffelfinger became the first football player to be paid for his services making him the first professional in the history of the gridiron. Heffelfinger, a three time All American out of Yale played as an amateur with the Chicago Athletic Association following his collegiate days. In Chicago, Heffelfinger was compensated as well in what was called "double expense money" which basically amounted to the team rewarding him with gifts that he could turn around and sell for a great price. Up until that point no player had been openly paid cash for his services, until Heffelfinger was approached by the Allegheny Athletic Club out of Pennsylvania. At first they offered him $250 to play which was turned down as he didn't think it was worth jeopardizing his amateur status. When they doubled the offer to $500 he changed his mind and would play for the team later that day against the Pittsburgh Athletic Club. The investment paid off for Allegheny as Heffelfinger scored the only points in the contest after he picked up a fumble and ran it in for a touchdown. Allegheny won the contest 4-0 as touchdowns were just four points and the extra point had yet to become a part of the game. For many years John Brallier of the Latrobe Athletic Association was considered to be the first professional football player after he was paid $10 to play a game in 1895. That all changed in the 1960s when a man named Nelson Ross walked into the office of Art Rooney the President of the Pittsburgh Steelers. Ross produced a manuscript that he believed proved that Heffelfinger was the first professional football player. Shortly thereafter, the Pro Football Hall of Fame located a ledger that would substantiate his claims. The $500 that Heffelfinger was paid would equate to nearly $13,000 today.

What I really enjoy doing is bringing a great account of the game that was played. In this case it was hard to come by especially with the way the papers of the day used english. I did find an archive from the Pittsburgh Press that has a description which I found interesting enough to provide a link to. If you go to page 6 near the bottom of the right side of the page there is an article titled "Four To Nothing" that can give you a look at how it was reported one day after the game. http://news.google.com/newspapers?nid=djft3U1LymYC&dat=18921113&printsec=frontpage&hl=en I'll tell you right now that it is not the easiest thing to comprehend. The Pro Football Hall Of Fame also did a great piece on Heffelfinger that can be viewed here. http://www.profootballhof.com/history/general/birth.aspx In that article there is a copy of the ledger that proved Heffelfinger was the first professional football player in America.
Posted by Wade Forrester at 12:19 AM