November 27, 1980: Bears and Lions Play to A Thrilling Finish in a Turkey Day Classic 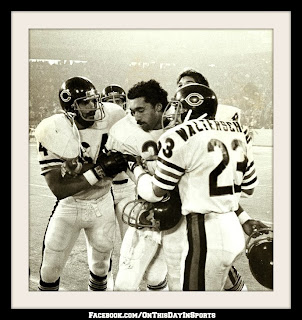 On November 27, 1980, the Chicago Bears won a Thanksgiving thriller in Detroit as they tied the ballgame
as time expired in regulation, then on the first play of the overtime return specialist Dave Williams took the opening kickoff 95 yards and scored the game winning touchdown in the 23-17 Bears victory. The Chicago quarterback Vince Evans was instrumental in the victory as well. He led the Bears back from a 14 point deficit in the fourth quarter. The fourth quarter was less than three minutes old when Evans capped off a nine play 86 yard drive with a 20 yard pass touchdown pass to Bob Fisher that put the Bears within 7 of evening things up. The tying drive of the ballgame began with the Bears on their own 6 and 3:37 left in regulation. Evans marched them all the way down to the Lions 4 using up most of the clock on the way. With just enough time to run one more play, he dropped back, couldn't find a receiver, then darted up the middle  and scored the tying touchdown as the zeros ran across the clock.  The overtime period lasted exactly 21 seconds, after the Bears won the toss Williams was off to the races on the return and victory was theirs. After the game Bears head coach, Neill Armstrong said "I've been in football a long time, but I just don't ever remember a game like this. A touchdown scored with no time left, we win the toss and run the kickoff back for a touchdown" as he sat there stunned by his own good fortune. He joked that the only coaching he did that day was tell them to go out and win the toss before the overtime began. When Williams was interviewed he said "After I caught the ball, I was just trying to get us the best field position possible. I felt I had a chance to go all the way after I cut left and could see the goal line."  He found his running lane and ran all the way to victory, capping off what was a great Thanksgiving for the fans in the Windy City.

Watch Williams take it to the house: http://www.nfl.com/videos/nfl-thanksgiving/09000d5d8242a3a9/Thanksgiving-Memories-The-walk-off-return
Posted by Wade Forrester at 12:01 AM