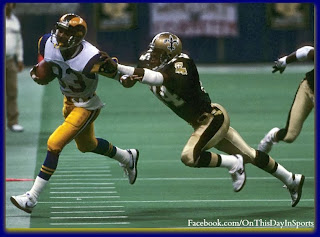 On November 26, 1989, in a stunning  20-17 win over the Saints in New Orleans, Los Angeles Rams wide receiver Willie "Flipper" Anderson caught 15 passes for 336 yards which established a record for most receiving yards in one game. Flipper, a second year player out of UCLA literally took matters into his own hands. He was catching everything that Jim Everett threw at him and when they found themselves down 17-3 with time winding down in the fourth quarter the tide began to turn. Anderson hauled in a 46 yard pass that set up a 5 yard touchdown run by Buford McGee that closed the gap to 17-10 with just 2:46 left on the clock. The Saints offense stalled before it started and with 2:04 left in regulation they had to punt the ball right back to the Rams who took over on the Saints 40.  Once again Flipper was the man who got the job done as they drove down the field for the tie. He caught a 14 yard pass that put the Rams at the Saints 15, then eight seconds later he caught a perfectly lofted ball in the right corner of the endzone to tie the ballgame. Flipper wasn't done just yet, in the overtime he caught a 14 and a 26 yard pass to set up the game winning field goal by Mike Lansford who split the uprights from 31 yards out. After the game Everett said "I hope our fans stick in there. We're going to send too many people to the hospital with heart attacks." Anderson rather stunned by his stunning performance said "It just happened. It just hasn't sunk in yet." The previous record  of 309 receiving yards had been set by Kansas City's Stephone Paige in 1985 in a game against the San Diego Chargers. The comeback win was a huge one for the Rams, it moved them to 8-4 and kept them within arms reach of the division leading 49ers who sat at 9-2. The Rams would end up with an 11-5 record and would meet the 14-2 Niners in the NFC Championship game. They were no match for Joe Montana's San Francisco team  that would end up winning the Super Bowl. However, that late November day by Anderson will never be forgotten. Calvin Johnson nearly surpassed it with a 329 yard performance just last month, but no man has been able to get passed that guy they called Flipper.

Only 5 men have achieved more than 300 reception yards in a game. You can check the list out here: http://www.pro-football-reference.com/leaders/rec_yds_single_game.htm

Here's the box score from Flipper's historic day: http://www.pro-football-reference.com/boxscores/198911260nor.htm
Posted by Wade Forrester at 12:02 AM