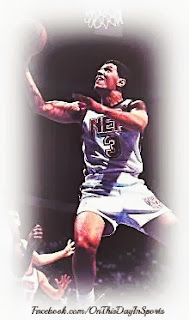 On November 11, 1993, the New Jersey Nets organization retired the #3 in honor of Drazen Petrovic who had been tragically killed in a car accident in June of that same year. Petrovic was quickly making a name for himself in the NBA when his life suddenly came to an end. The 6 foot 5 guard gained notoriety by being a key contributor on team Yugoslavia in the '84 and '88 Olympics winning the Bronze in his first trip then the silver in his second. The well documented divide between Yugoslavia and Croatia in 1992 had Petrovic on the Croatian side of the war torn country and in 1992 he won silver as a member of the Croatian squad. Before his second trip to the Olympics he joined the ranks of the NBA. The year was 1986 and Petrovic was drafted 3rd overall by the Portland Trail Blazers. The transition into the NBA was not an easy one for Petrovic. The Trail Blazers had an established backcourt with Clyde Drexler and Terry Porter and the playing time was limited for him and he let it be known that he expected more. His fortunes would change in January of 1991 when Portland sent him to New Jersey in a three team deal that would rejuvenate Petrovic's career.The Nets had lacked success before he arrived but with the addition of him and several other good young players the team would make a playoff appearance in his first full season with the team. It looked as if things were going in the right direction as he was getting playing time while becoming one of the best in the business. By the end of the '92-'93 season he held the eleventh best average in scoring with 22.3 per game and had established himself as a viable 3 point man. Despite his success he was not selected to the All Star game which was something that did not go over well with him. After the season ended there was speculation that he would go play ball in Greece. Unfortunately for him that would never come to fruition. On June 7th of '93 Petrovic traveled to Poland to watch the Croatian National Team play in a qualifying game. After the contest, he decided to skip a flight back to Croatia so he could ride back with his girlfriend and another friend. It was a fateful decision. With rain coming down, while traveling down the Autobahn, a big rig trying to avoid another accident lost control and came through the median killing Petrovic and seriously injuring both passengers in the VW Golf that they were traveling in. Petrovic was in the passenger seat sleeping at the time of the accident and he was not wearing a seatbelt. He was just 28 years old, had his whole life ahead of him, then it was over in the blink of an eye. It's a very sad end for a promising young athlete but he would never be forgotten in his home country or the United States. The decision to retire his #3 in New Jersey showed great class for the organization that he was only able to give 2 full seasons before his life came to an end. He was posthumously inducted into the Naismith Basketball Hall of Fame in 2002 and in his home country he was honored in a multitude of ways. His legacy in the United States is not nearly the same as his legacy in Croatia. He is a national hero in his homeland and despite the fact he is no longer on this earth he will live forever in the hearts of many.

As many of you know I prefer to use facts that are absolute great moments in sport. While it is great that the Nets chose to retire his number, the reason behind it is a sad one. I do believe that you can pay no greater tribute to someone that lost their life than remembering the life they lived. Quite awhile back I watched "Once Brothers" a 30 for 30 documentary that was ESPN. It covers the divide in Yugoslavia that led to a divide between Petrovic and his friend Vlade Divac who also made it to the NBA. It's a sad story, but it truly gives you a look at Petrovic's life. Something I thought about after watching it is how important it is to not hold a grudge in life because after all it is a limited time offer and we just never know when it will come to an end. I know that it weighs heavy on Divac that they were never able to resolve the issues they had between them. If you would like to watch that documentary I know it is on Netflix and Youtube as well. Here's a link: http://www.youtube.com/watch?v=zanji1I7Yd4
Posted by Wade Forrester at 12:16 AM