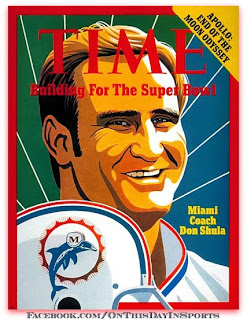 On November 8, 1981, Don Shula became just the fourth head coach in NFL history to record 200 wins. # 200 did not come easy, in fact it would take his Dolphins an overtime period for them to pull out the 30-27 victory over the New England Patriots in Foxboro. The Patriots had a commanding 17-6 lead at the half but just couldn't hold on as the Dolphins came storming back into the contest. Tom Vigorito closed the gap with a 30 yard touchdown run in the third before a Tony Nathan put the Dolphins in fron 20-17 with a one yard run later in the quarter. The Dolphins lead didn't last long. The Pats quarterback Steve Grogan drove them down to the goal line in the fourth and with 7 minutes and 21 seconds left in regulation Tony Collins blasted through the line and gave the New England squad a 24-20 lead. The craziest play of the game was right around the corner. With a little more than two minutes left in the fourth and the Dolphins near midfield, Miami quarterback handed off to rookie fullback Andra Franklin in what was supposed to be a designed flea flicker. However, it didn't go exactly as it was designed. Franklin was supposed to fake a run up the middle then flip the ball to Woodley who would be looking for Duriel Harris who was going to go deep. The only problem was Franklin didn't get a clean handle on the ball and the next thing you know it bounced of three different lineman before ending up back in the fullback's hands who then turned flipped it to Woodley who unloaded a 55 yard bomb to Harris that gave the Phins a 27-24 lead. The play was called bizarre and a variety of other adjectives after it was all said and done. It might have looked like the final nail in the Patriots coffin but that would have to wait as they tied the ballgame with a 34 yard field goal from John Smith with just 11 seconds to go in regulation. The nail came with 7:51 left in the overtime period after Grogan tossed his fourth pick of the day to linebacker Bob Brudzinski that turned into the final 3 points of the game when Uwe von Schamnann booted it through the uprights from 30 yards out. Win number 200 was a memorable one for Shula who hadn't won a game in Foxboro since 1975. He would go onto win 128 more games following the victory in New England and his 328 wins makes him the winningest coach in the history of the league. His impressive resume includes 5 AFC Championship titles, 3 Championship rings, and he is the only coach to guide a team to an undefeated season that ended with a Super Bowl championship.

Check out the box score: http://www.pro-football-reference.com/boxscores/198111080nwe.htm