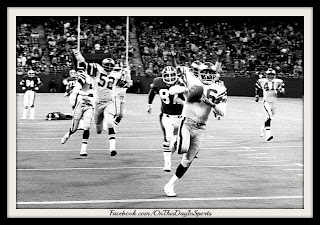 On November 19, 1978, the Philadelphia Eagles pulled off an improbable 19-17 victory over the Giants in New York when cornerback Herm Edwards picked up a fumble with just 20 seconds to go in the game and sprinted 26 yards for the game winning touchdown. The Giants were facing a third and short and all they needed to do was snap the ball and take a knee since the Eagles were out of timeouts. Instead, the coaching staff decided to call a handoff to fullback Larry Csonka. That's when the nightmare began in New York. When the Giants quarterback Joe Pisarcik took the snap he mishandled it immediately and it went bouncing across the artificial turf straight until Herm Edwards got his hands on it. It was all over from there as Edwards took it to the house. The head coach of the Giants John McVay later acknowledged that they called the play with the thought of getting a first down just in case there was a faked injury in an attempt to stop the clock. McVay said "In all my 25 years of coaching I have never seen such a horrifying finish to a game." The loss dropped the Giants to 5-7 and moved the Eagles to 7-5 giving them hopes of a playoff spot which was something they would end up getting. The game might have also been the beginning of the end for McVay in New York. After the season ended his contract was not renewed. In the end it is just another page in what is truly a great rivalry. I know it had to sting the fans of the Giants more than I could ever express in words but at the same time there were fans in Philly that rejoiced as they pulled off the inexplicable victory.