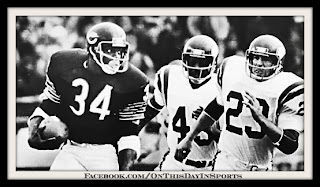 On November 20, 1977, Chicago Bears running back Walter Payton broke the all-time single game rushing record when he ran for 275 yards in a 10-7 win over the Minnesota Vikings at Soldier Field in Chicago. The record before the contest was 273 rushing yards which had been set by O.J. Simpson one year earlier. Payton came into the game fighting off flu symptoms but once he was on the gridiron he flipped a switch and was off to the races. In the first half rattled off a 144 yards on the ground and would nearly match the production in the second half. The only touchdown of the game was scored by Payton in the second quarter, it was a one yard blast that put the Bears up 7-0. As the two teams headed to the locker rooms at the half the Bears had tacked on 3 more and held a 10-0 lead. Both offenses were struggling with a passing game and the Minnesota offense couldn't get anything going at all while Payton ran circles around their defense. Sweetness moved within five yards of Simpson's record with a 58 yard explosion in the fourth then broke the record two carries later. Minnesota picked up their 7 points late in the fourth when they had the Bears pinned deep and Matt Blair blocked a punt that ended up in his teammate Bob Parson's hands, Parson's took it 10 yards into the endzone, keeping the Vikings from being shutout. It seems that Payton might have been the only offensive player on the field that day in Chicago, his quarterback Bob Avellini went 4 for 6 for 33 yards and one of those two incompletions ended up in the hands of a Vikings defender. Avellini's day just didn't matter with Payton standing in the backfield. The record stood until 2000 when Cincinnati's Corey Dillon ran for 278 yards in a game against the Denver Broncos. Today, Payton's 275 yard performance is good for fifth on the all-time list. Minnesota's Adrian Peterson is the current record holder, he rushed for 296 yards in 2007 in a game against the San Diego Chargers. When Payton broke the record he was a 23 year old kid who was embarking on one of the most storied careers in NFL history. What a career it was.

Here's the box score from Payton's 275 yard performance: http://www.pro-football-reference.com/boxscores/197711200chi.htm
Posted by Wade Forrester at 12:02 AM