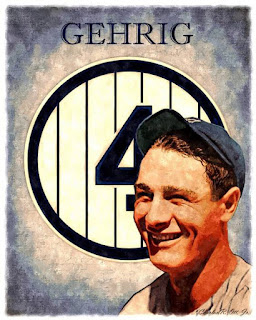 On June 1, 1925, Lou Gehrig came in to pinch hit for Pee Wee Wanninger and replaced Wally Pipp at first base for the New York Yankees, Gehrig didn't pick up a hit in the appearance but it did turn out out be the first of 2,130 consecutive games played for the man who would become known as The Iron Horse. The day after Gehrig made his appearance as a pinch hitter he was inserted into the starting lineup after Wally Pipp asked a trainer for some aspirin because of a terrible headache he was having. Once the Yankee skipper Miller Huggins heard that Pipp had a headache he said to him "Wally take the day off. We'll try that kid Gehrig at first today and get you back in there tomorrow" Pipp would call it the two most expensive aspirin in history. Gehrig picked up 3 hits in his first start, which included a double and a run scored as the Yankees knocked off the Washington Senators 5-3. Gehrig forged a legendary career that  spanned 17 seasons, he broke multiple records, many of those records still stand today. He stood at first base for the Yankees until he benched himself on May 2, 1939, when the announcer at Briggs Stadium in Detroit announced that Gehrig would not be appearing in the Yankees lineup for the first time in 2,130 games the Yankees slugger wept as he sat in the dugout. It was the end of an era.

If you would like to read more about the Pride of the Yankees check this out: http://www.baseball-reference.com/bullpen/Lou_Gehrig  it not only tells his story, it also lists his records and notable achievements.