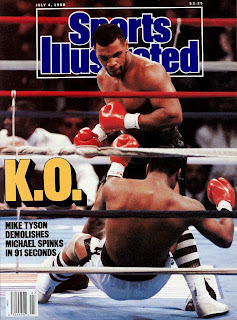 On June 27, 1988, Iron Mike Tyson knocked Michael Spinks out in just 1 minute and 31 seconds to become the undisputed Heavyweight Champion of the World. Both men had not lost a match going into the match and each considered themselves to be the true champion. Tyson held the WBA,WBC, and IBF belts, while Spinks held the Ring Magazine belt and was considered the lineal champion. The fight was billed as the"Once and For All" as only one champion would walk out of the ring that night in Atlantic City. Before the fight even started Spinks' manager Butch Lewis claimed he had seen a bump in Tyson's glove and insisted that his hands be rewrapped, Lewis would later admit he was trying to get a psychological edge which more than likely worked against him as the 21 year old kid came out pissed and ready to rumble. Tyson came out and simply pummeled the 31 year old Spinks, he worked fiercely and quickly as he trapped him against the ropes and knocked him to the canvas for the first time in his career. After a four count Spinks looked ready to go until the two boxers came toward each other and Tyson landed a quick left right combo that sent Spinks crashing right back to the mat, this time he could not recover and after a count of ten Tyson was the Undisputed Champion. Only ten punches were landed in this one, with eight of them coming from Tyson, the kid showed pure dominance as he was just reaching his potential. The fight proved to be the last one for Spinks while Tyson's career was reaching a pinnacle. Iron Mike successfully defended his title nine times before he was upset by Buster Douglas in 1990. After his well documented legal troubles that landed him in prison, he was not able to regain the title, however, he was and always will be one of the best that ever put on a pair of gloves.

And this is a link to Mama Said Knock You Out by LL Cool J: http://www.youtube.com/watch?v=vimZj8HW0Kg it seemed appropriate.
Posted by Wade Forrester at 12:06 AM