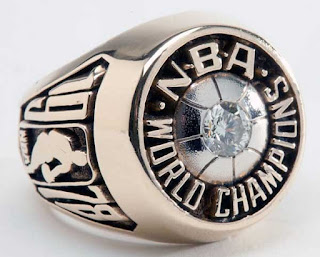 On June 7, 1978, the Washington Bullets brought home a title by beating the Seattle SuperSonics 105-99 in Game 7 of the NBA Finals. The two teams split the first four games, then Seattle just got by the Bullets with a 98-94 in Game 5. Facing elimination the Bullets dominated in Game 6 with a 117-82 victory. With the series headed back to Seattle for Game 7, Sonics fans had to believe they would be celebrating a championship very soon. The Sonics would stay within striking distance throughout the contest but they just couldn't get passed them. Paul Silas knocked down 2 to bring the score to 101-99 with just seconds to go, Silas then fouled Bullets big man Wes Unseld who drained both of his free throws. Moments later Bob Dandridge's slam dunk finished the Sonics off and the Bullets were champs. The Bullets had made two appearances in the Finals in the seventies, in both of those appearances they were swept and still yearned for the elusive title that they would finally get in '78. Both teams met in the Finals one year later, this time Seattle would bring home the Championship, by knocking out Washington in 5 games. The 1978 Championship was the first and only title for the franchise that would become known as the Wizards.

If you would like to read more about Washington's historic run check this out: http://www.nba.com/history/finals/19771978.html
Posted by Wade Forrester at 1:17 AM