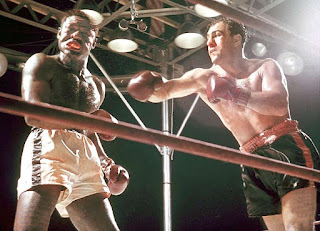 On June 17, 1954, in a fight that went the full 15 rounds, Rocky Marciano successfully defended his title against Ezzard Charles at Yankee Stadium in New York. Charles had an edge early, he pounded Marciano with a series of left hooks and opened up a pretty nasty cut under his eye in the fourth round. Marciano countered with his right but it hardly fazed his opponent, then the tide turned. Marciano unleashed his power in the 5th then proceeded to dominate his opponent, he tried to knock him out in the 6th and the 7th but Charles wasn't having it. They traded punches at will in the late rounds then Charles began to wear down and Marciano used him as a punching bag until the bell rang at the end of the 15th. Marciano won the match by unanimous decision, three months later the two men would meet again at Yankee Stadium with Marciano knocking out Charles in the 8th round of the rematch. The two fights with Charles were Marciano's the 47th and 48th victories of his career, he fought one more fight against Archie Moore in 1955 in which he won by knockout. With a 49-0 record in the ring Marciano is the only man to retire as an undefeated heavyweight champion.

Great footage of the fight here: http://www.youtube.com/watch?v=FSPJC7qSAeg
Posted by Wade Forrester at 12:14 AM