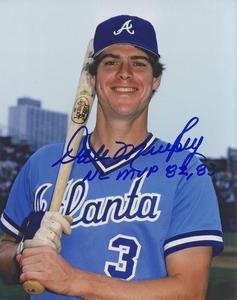 On June 12, 1983, before a game against the San Francisco Giants at Fulton County Stadium in Atlanta, Braves outfielder Dale Murphy met with a 6 year old little girl named Elizabeth Smith who had lost both hands and a leg after stepping on a live power line. Murphy gave the girl a cap and a t-shirt before the little girl's nurse asked him if he could hit a home run for her, Murphy admitted that the question caught him off guard and he just mumbled "well okay", Murphy didn't hit one home run that day in Atlanta he hit two. The first jack came in the bottom of the 3rd, it was a 2 run shot that scored the first runs of the game. The Giants battled back to tie it in the 5th, then Murphy led off the bottom of the 6th with his second round tripper of the game. The Braves went onto win 3-2 on the day that Murphy provided all the offense.

Check Out The Box Score: http://www.baseball-reference.com/boxes/ATL/ATL198306120.shtml
Posted by Wade Forrester at 12:23 AM