June 20, 1925: Max Carey Becomes The First Switch Hitter To Hit For The Cycle 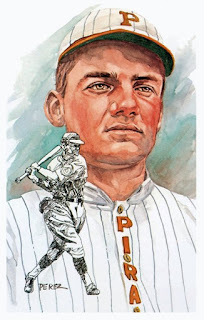 On June 20, 1925, Pirates center fielder Max Carey became the first ever switch hitter to hit for the cycle. He accomplished the feat in a 21-5 beatdown of the Brooklyn Robins at Forbes Field in Pittsburgh. His fellow outfielder Kiki Cuyler picked up 6 ribbies on two home runs and a triple, while shortstop Glenn Wright fell just a single short of the cycle.  The offensive explosion set a franchise record for runs scored in a game which surprisingly the Pirates would break in the next game as they pounded the St. Louis Cardinals 24-6 just two days later at Sportsman's Park in St. Louis, the rout of the Cardinals is still a franchise record. Carey was best known for his excellent fielding and his ability to swipe a base, he led the league 10 times in stolen bases and when he retired in 1929. His 738 swipes was a National Record, the record would stand until Lou Brock surpassed him in 1974. The 1925 season was a great one for the 35 year old Carey, after leading the league with 46 stolen bases in the regular season his Pirates went onto win the World Series in 7 games over the Washington Senators. It was the only World Series title for the man who would be inducted into the Baseball Hall of Fame in 1951.

Check out the box score: http://www.baseball-reference.com/boxes/PIT/PIT192506200.shtml

Carey's career stats: http://www.baseball-reference.com/players/c/careyma01.shtml
Posted by Wade Forrester at 12:49 AM