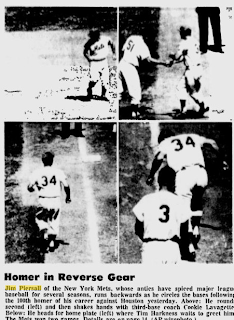 On June 23, 1963, New York Mets outfielder Jimmy Piersall celebrated the 100th home run of his career by running around the bases backwards. Piersall had said he noticed that when Duke Snider hit his 400th jack that there was little fanfare so he decided he was going to something a little "different" when he reached his milestone. It happened in the 5th inning with the Mets already on top 1-0, Piersall led the inning off with a bomb then dropped his bat and proceeded to first base running backwards, he would touch'em all  that way much to the amusement of the fans at the Polo Grounds in New York. Some in attendance weren't amused by his antics, namely the commissioner of baseball Ford Frick and Piersall's skipper Casey Stengel. Stengel was so pissed that he released him just two days later. Piersall went onto join the Angels organization where he played until 1967 before moving to the front office.

Piersall was an interesting guy to say the least, he once stepped to the plate wearing a Beatles wig while playing air guitar on his bat, if you would like to read more about him check this out:  http://espn.go.com/classic/biography/s/Piersall_Jim.html
Posted by Wade Forrester at 1:53 AM