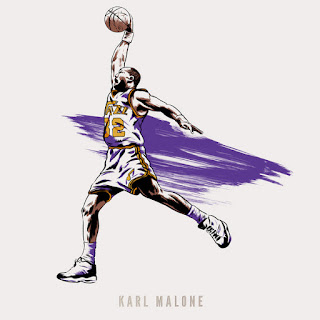 On June 3, 1999, Utah Jazz star Karl Malone was named the Most Valuable Player of the NBA. It was the second MVP award for The Mailman, making him just the ninth player in NBA history to win it more than once. Malone's outstanding play earned him the award in 1997, he led his team all the way to The Finals only to be beaten my the Michael Jordan led Chicago Bulls. The next season the Jazz met the Bulls once again in The Finals and once again The Mailman and the rest of those great teams would have their dream of a ring dashed by Jordan and company. The Jazz were simply dominant in the strike shortened '99 season, they posted a 37-13 record with Malone leading the charge. Malone took home his second MVP award, but the Jazz made a second round exit and once again Malone and the Jazz would fall short of a Championship. To date only 12 men have won multiple MVP awards, Kareem Abdul-Jabbar won 6, Bill Russell and Michael Jordan won 5, Wilt Chamberlain and (the most recent winner) LeBron James won 4, Moses Malone, Larry Bird, and Magic Johnson won 3, and Bob Pettit, Tim Duncan, and Steve Nash are with Malone with 2.

The Artwork was done by Joel Kimmel, you can view more of his work here: http://society6.com/joelkimmel/Karl-Malone_Print
Posted by Wade Forrester at 7:38 AM