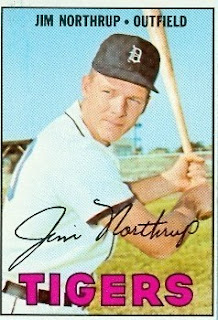 On June 24, 1968, Tigers outfielder Jim Northrup hit two grand slams in a 14-3 rout over the Indians in Cleveland. The man nicknamed "The Silver Fox" was just the sixth player to accomplish the feat and only the second player to accomplish it in consecutive at bats, with Jim Gentile being the first to do so in 1961. Five days later Northrup hit another grand slam which made him the first player to hit three grand slams in one week, it was a feat that was later matched by Larry Parrish of the Texas Rangers in 1982. To date only 13 players have hit two grand slams in one game with the last being Josh Willingham of the Washington Nationals in 2009.

You can look over the list of 13 men to accomplish the feat here: http://www.baseball-almanac.com/feats/feats11.shtml
Posted by Wade Forrester at 1:55 AM