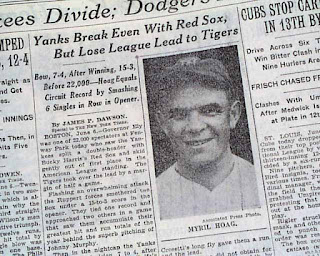 On June 6, 1934,  in the first game of a doubleheader at Fenway Park in Boston, New York Yankees outfielder Myril Hoag went 6 for 6 in a 15-3 rout of  the Red Sox. Hoag was the first player to accomplish the feat in the pinstripes, nearly 74 years later Johnny Damon joined him as the only two Yankees to go 6 for 6 in a game. Hoag spent 7 years with the Yankees and was a part of 3 Championship teams with the Bronx Bombers.

If you would like to know more about Myril Hoag check this out:  http://www.baseball-reference.com/bullpen/Myril_Hoag